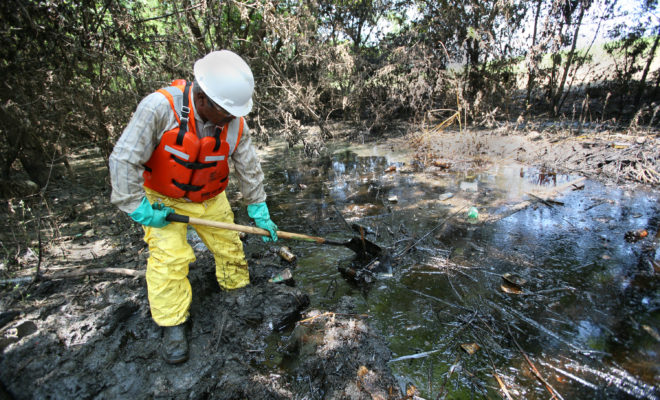 From last month’s underwater pipeline spill [1] in Indonesia, to a 111,300-tonne spill [2] of natural gas condensate in the East China Sea, to multiple pipeline breaches across North America and beyond, “pipeline accidents continue to spew gas and oil into the environment, polluting air, water, and land, and affecting wildlife and habitat, as well as human communities,” Suzuki writes. But “as disastrous as those accidents are, the consequences of the products reaching their destinations are also horrendous, as burning fossil fuels spills massive volumes of climate-disrupting greenhouse gases into the atmosphere.

“With the rapacious rush to exploit every bit of gas, oil, and coal before the reality and consequences of climate change become too devastating to ignore, we’re likely to see ever-increasing accidental and deliberate fossil fuel contamination.”

Which makes it that much more bizarre to see federal and some provincial governments claim not only that new pipeline development is consistent with Canada’s climate goals, but essential to achieving them, he argues. “If short-term economic gain, a relatively small number of jobs, and the priorities of shareholders in mostly foreign-owned companies are more important to the national interest than ensuring that people and ecosystems here and around the world remain healthy and alive, something is wrong.”

Meanwhile, Natural Resources Minister Jim Car was thinking back [4] to his promise to Tsleil-Waututh Nation Chief Maureen Thomas, one of the communities on the front lines of the Kinder Morgan project. “I was very much involved in developing personal relationships with Indigenous leaders, particularly with the Tsleil-Waututh Nation, and have developed a personal relationship with the chief,” Carr told [4] the Observer. “I have visited the community. I have spent considerable time with her, as recently as a number of weeks ago, and she is a wonderful person and leader.”

During one of those visits, the two of them shared a “very solemn moment,” Carr told Observer Managing Editor Mike De Souza. “As we were plying the waters of the Burrard Inlet together two summers ago, I said, ‘Chief, let’s promise each other that we will leave your backyard better than we found it.’”

He maintained that he’s still confident in that position, even as the federal government and the Tsleil-Waututh face off in court over the C$7.4-billion project.

In a post last week for The Tyee, veteran reporter Andrew Nikiforuk laid out [5] the troubled history of the company whose megaproject Carr’s government may now be intent on bailing out—tracing Kinder Morgan’s origins back to the disgraced Enron empire, and recounting its recent history of poor stock performance, troubled pipeline financing, active support for the Republican Party, and extensive lobbying in Canada. He accuses the company of repeatedly violating the law, notes that it has profited handsomely from fossil fuel subsidies, and paid no taxes in 2017.

I am very familiar with the Enron scandal as well as their treatment of foreign projects where they inserted The Enron Clause into their contracts. Alberta found out that they have that clause in their contracts a few years ago. The clause says that the country/province is legally responsible for any financial short fall of their projects and must make up that shortfall. I have a report by Inside Climate News.org dated July 20/2016 about the Kalamazoo River spill of 2010. It explanes what and how that happened and the monster it turned out to be. It’s not a normal oil that you can put up booms and contain it, it sinks and must be dredged, the chemicals used to turn it into a slurry are Carcinogenic, volatile and combustible. When they evaporate into the air, people get very sick and some die from inhaling this air. What is it doing In downtown Vancouver and surrounding area where millions of people live. One spill is all it takes to make this beautiful coast unlivable, and would kill the local economy, wildlife and people. It’s not worth the risk.