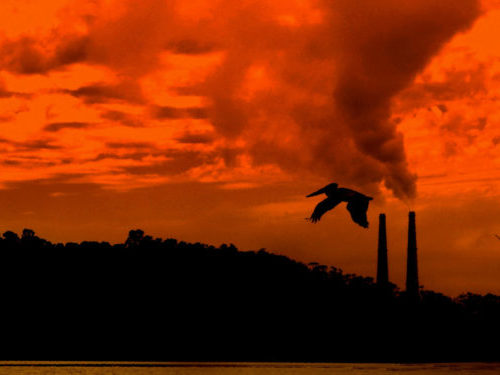 A target of 2.0°C average global warming is no longer the “guardrail” that will hold off many the worst effects of climate change, according to a series of papers published this week in Philosophical Transactions A, a scientific journal of the British Royal Society.

In the period before and after the 2015 United Nations climate conference in Paris, researchers, advocates, and vulnerable nations came to see [1] the 2.0°C target as a “guardrail” against severe climate impacts and 1.5°C as a “buffer zone”. The new research indicates that 2.0°C still delivers a future with massive climate disruption.

“A world that heats up by 2.0°C (3.6°F)—long regarded as the temperature ceiling for a climate-safe planet—could see mass displacement due to rising seas, a drop in per capita income, regional shortages of food and fresh water, and the loss of animal and plant species at an accelerated speed,” Agence France-Presse reports. “Poor and emerging countries of Asia, Africa, and Latin America will get hit hardest.”

At 1.0°C warming so far, “Earth has seen a crescendo of droughts, heat waves, and storms ramped up by rising seas,” AFP notes.

“We are detecting large changes in climate impacts for a 2.0°C world, and so should take steps to avoid this,” said lead editor Dann Mitchell, an assistant professor at the University of Bristol. And the latest findings show that “how fast we get to a 2.0°C world” is critical.

“If it only takes a couple of decades, we will be in trouble because we won’t have time to adapt to the climate,” Mitchell told AFP.

The series included a study by University of Oxford economist Felix Pretis that anticipates an average 13% drop in GDP by 2100, once the massive costs of adapting to climate change are factored in. A 2.0°C world would produce “significant negative impact on the rates of economic growth,” he said. At 1.5°C, growth projections “are near indistinguishable from current conditions.”

The AFP report points to multiple climate impacts at 2.0°C that would be lessened at 1.5°: sea level rise of a half-metre by 2100, rising well above a metre by 2300; 200 million people per year affected by flooding by 2300; and large swaths of humanity facing increased drought, flooding, heat waves, and weather disruption, with the greatest impacts in Oman, India, Bangladesh, Saudi Arabia, and Brazil.

“Even if we can’t limit global temperature increase to 1.5°C, but can limit it to 1.7° or 1.8°, this is still hugely more beneficial than just giving up,” Mitchell stressed.

“We can still keep temperatures well below 2.0°,” added University of Oxford geosystem scientist Myles Allen, a co-author on several of the studies, but only if “we start now and reduce emissions steadily to zero in the second half of the century.”