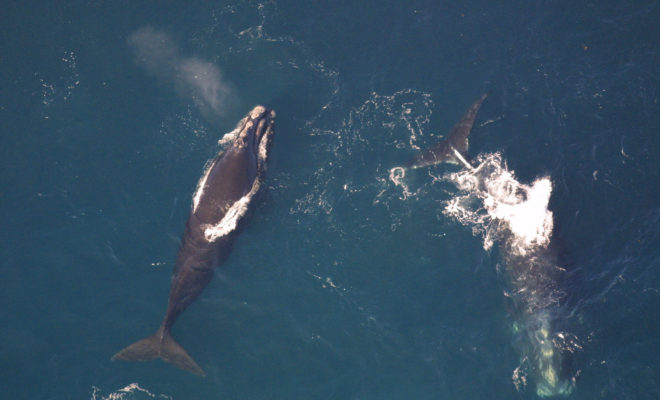 Critically endangered North Atlantic right whales will be placed at even greater risk as a result of an offshore drilling project approved [1] by Environment and Climate Minister Catherine McKenna just last month, the Globe and Mail reports.

The decision has scientists “questioning the federal government’s decision to allow more ship traffic and underwater noise” at the site off the country’s east coast, “warning it could inflict more harm and contribute to the extinction” of a species that was considered fragile enough to warrant special attention in this year’s federal budget and through a flurry of other protection measures.

Over the last year, the Globe notes, fishing gear entanglements and ship strikes have killed 4% of the right whale population, and no new calves were spotted in the whales’ usual birthing grounds this year. Twelve of the 18 deaths were discovered in Canadian waters, about 500 kilometres from the proposed exploratory drilling site.

Before she approved BP Canada’s plan to drill up to seven offshore exploration wells in the Scotian Basin southeast of Nova Scotia, McKenna concluded the activity was “not likely to cause significant adverse environmental effects,” a federal news advisory said [3] at the time. But the Canadian Environmental Assessment Agency had warned that the project “increases the risk of death and habitat quality from ship strikes and underwater noise to six at-risk whale species, including the right whale, which could be present in the project area,” the Globe states.

McKenna said she had based her decision on that report, adding that “the legally binding conditions set out in my decision statement will help keep our environment safe for future generations while ensuring the growth of Canada’s economy.”

But Dalhousie University biologist Scott Brillant said the precarious health of the species would be affected by adding a new, heavy industry to its habitat. “I wouldn’t go so far as to say this will be a tipping point, but what really needs to be considered here is that we’re dealing with a species that is totally on the brink,” he told the Globe. “Within the next 20 years, these animals could be extinct.”

He added that, “if something has been assessed as having a moderate risk to these whales, it really needs serious consideration about the value of it, and balancing that value with the very real, and very soon, loss of a large, unique species on the planet.”

Halifax biologist Lindy Weilgart said right whales don’t generally congregate near the BP drilling site. But their distribution is changing, and they would have to move past the site to migrate between the Gulf of St. Lawrence and the Bay of Fundy.

Weilgart and Brillant identified underwater noise from industrial activity as a serious danger to whales, drowning out the low-frequency upcalls they use to communicate about food, mating, migration, care of their calves, and possible danger—like approaching ships.

“Even at low levels, this noise drastically changes the behaviour of the animal, and knowing so little about what’s important to these animals, we need to be very attentive to how we affect their behaviour and how they use different habitats,” Brilliant told the Globe. “Overall, we need to just stop disrupting their lives in the way that we do.”

At the Council of Canadians, energy and climate justice campaigner Andrea Harden-Donahue notes [4] that BP is the same company responsible for the Deepwater Horizon [5] disaster that caused a massive oil spill in the Gulf of Mexico eight years ago—and the company is now proposing to drill wells that are twice as deep. This week, the Council ran a three-day coastal tour, spotlighting the risks of offshore drilling at events in Halifax, Shelburne, and Lunenburg.

The hypocrisy of the Liberal government in campaigning in 2015 to “make environmental assessment credible again” is on display: they kept Harper’s changes to EA, creating a conflict of interest whereby the offshore fed/prov petroleum boards are responsible for EA as well as promotion of the offshore projects. The proponents are the oil companies, but it is the CNSOPB (the petroleum board) going around to Nova Scotia’s south shore municipalities shilling for the projects and providing slanted information such as the erroneous notion that the toxic oil dispersant ‘Corexit’ is as ‘harmless as baby shampoo’.

As harmless as baby shampoo? Seriously?? Byron, if you can provide a link or a scan of a leaflet, *that* is a story that we’ll be happy to follow up. Send tips to [6]. Thanks!

The CNSOPB hand outs compare Corexit with “household products like shampoos”. So “baby shampoo” may be an exaggeration.

Also noteworthy that Corexit is typically used with spills of heavier oils, which the companies do not expect to find offshore NS. Application of dispersants would be a step that would require a further permission from the petroleum board.

So with those corrections, my own version of Opinion Corexit, I stand by my previous comments. The petroleum boards are acting like proponents, not guardians of the public interest, in my opinion.