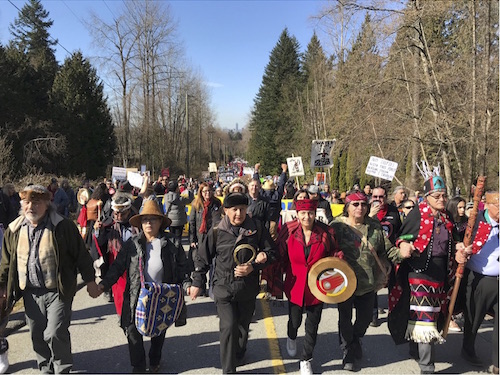 An estimated 10,000 protesters joined Indigenous leaders from across North America for a march through Burnaby, British Columbia on Saturday, declaring their opposition to Kinder Morgan’s Trans Mountain pipeline expansion and warning that Prime Minister Justin Trudeau’s avid support for the project is a major threat to Canada’s hopes for reconciliation with First Peoples.

“We are gathering today to send a clear message to Kinder Morgan and Justin Trudeau that Indigenous peoples across North America and British Columbians will never let this pipeline be built,” said Grand Chief Stewart Phillip of the Union of B.C. Indian Chiefs.

“I call on everyone in the crowd today and watching from home to join us in escalating action to stop Kinder Morgan in the coming days. Rachel Notley, we are not in the least bit intimidated by your desperate threats, and we will not stop!”

“Kwekwecnewtxw—Protect the Inlet was the largest-ever show of opposition to Kinder Morgan’s planned expansion of the Trans Mountain pipeline and tanker project,” the protest website states. “Led by Indigenous peoples from across Canada and the United States—including the Mohawk Council of Kanesatake, Athabaska Chipewyan Nation, and Ihanktonwan Dakota and Chickasaw Nations—the march wound its way from Lake City Way Skytrain Station, finishing at a rally at the Watch House site.”

That was a reference to a traditional Coast Salish watch house that a group of volunteers built near the pipeline route, reflecting a traditional approach to guarding the territory from danger.

“My ancestors built Kwekwecnewtxw—‘a place to watch from’—when danger threatened our people,” said Will George, a member of the Tsleil-Waututh First Nation. “Danger threatens our people now, as Kinder Morgan tries to send hazardous diluted bitumen through our territory. Today we build our own watch house to protect the Salish Sea and the people who depend on it.”

A day earlier, a B.C. supreme court judge granted [2] Trans Mountain an injunction that restricts protesters from coming within 50 metres of the construction site. “Calgary-based Trans Mountain said in the notice of claim that protesters have obstructed roads it requires to access the Westridge Marine Terminal in order to build a new dock complex with three berths,” CBC reports. “Kyle Friesen, a lawyer representing the RCMP, said the force doesn’t want to squelch anyone’s right to protest, but a restricted area is needed to create a barrier so gatherings are peaceful, lawful, and safe, especially if trees are falling to clear land for construction.”

In an email to supporters, STAND.earth characterized the injunction as a “Strategic Lawsuit Against Public Participation” (SLAPP), a lawsuit that is “not designed to seek justice, but a sly tactic used by corporations to silence free speech through expensive, time-consuming litigation.” STAND promised to fight the injunction in court later this week.

“Kinder Morgan’s action is an obvious SLAPP lawsuit designed to intimidate everyday citizens and stop people from speaking out against its dirty pipeline expansion,” said [3] Campaign Director Karen Mahon. “This lawsuit tries to prevent someone from so much as standing on the side of the road and holding a sign.”

“When an injunction is granted by the court, protesters are arrested for criminal contempt of court, rather than for civil disobedience,” added Board of Change Executive Director Monika Marcovici. “They have no defence possible in court, and are not given a chance to make their case in front of a jury. The sentences are often much harsher, not to mention having a criminal record.”

I dispute the number, but not the potency of the protestors of the Kinder Morgan pipeline.
I was there. I was impressed.
Inflating the protest numbers subjects them to incredulous scrutiny and disbelief.
I wish them well.