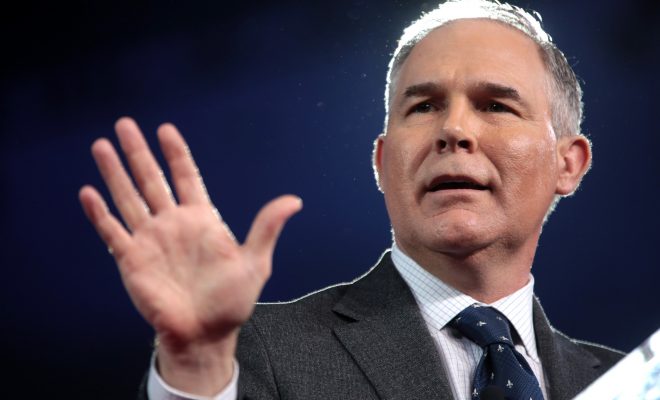 At least one observer is getting a sense of acute paranoia from the travel habits of U.S. Environmental Protection Agency Administrator Scott Pruitt, whose proclivities tend toward first class air fares, high-end hotels, and an aversion to releasing his itinerary as a public official.

A Washington Post exposé on Donald Trump’s climate-denying cabinet member begins with a short stretch in early June 2017 in which taxpayer-funded travel for Pruitt and his top aides “cost at least $90,000, according to months of receipts obtained by the Environmental Integrity Project under the Freedom of Information Act. That figure does not account for the costs of Pruitt’s round-the-clock security detail, which have not been disclosed.”

As he concludes his first year at the EPA, “Pruitt is distinguishing himself from his predecessors in ways that go beyond policy differences,” the Post notes. “His travel practices—which tend to be secretive, costly, and frequent—are integral to how he approaches his role.” He “tends to bring a larger entourage of political advisers on his trips than past administrators,” and while the rest of the team generally appears to fly coach, “he often sits in first or business class, which previous administrators typically eschewed.”

Pruitt’s international travel to places like Morocco and Rome, and his planned trips this year to Israel, Australia, Japan, Mexico, and possibly Canada, is never officially announced, appears to be “largely untethered to the kind of multilateral environmental summits that dominated his predecessors’ schedules, and Pruitt rarely discloses where he plans to be,” the paper notes.

Spokesperson Liz Bowman said the EPA withholds Pruitt’s schedule “due to security concerns” and because it could become a “distraction”.

That explanation carried little weight with Environmental Integrity Project Executive Director Eric Schaeffer, who questioned how essential the travel is to Pruitt’s work. “What did American taxpayers get for Pruitt visiting the Vatican and getting photographed with European agency heads?” he asked. “This was all for show.”

He called EPA’s refusal to release Pruitt’s travel schedule “acutely paranoid”, adding that “he’s a public official. His schedule should be publicly known.”

Prompted by congressional Democrats, the EPA inspector-general’s office is reviewing Pruitt’s travel over the last year, as well as the expansion of his round-the-clock security detail.