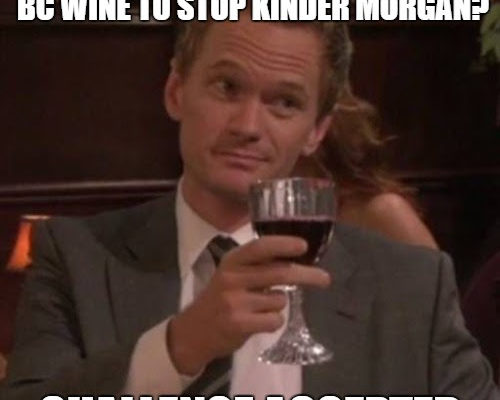 Alberta upped the ante in its burgeoning trade war with British Columbia yesterday, with Premier Rachel Notley announcing that her province will boycott all imported wines from B.C.

“The province’s tough stance follows B.C.’s call last week [1] for further review of the oil spill risk from the [Kinder Morgan] pipeline expansion, a move that could delay a project Alberta sees as vital to its economy,” CBC reports. After first suspending negotiations on a C$500-million-per-year electricity import-export deal, Notley declared that the Alberta Gaming and Liquor Commission (AGLC), which controls almost all the province’s alcohol imports, would immediately stop all incoming shipments from B.C.

Those sales add up to 17.2 million bottles and about $70 million per year, Notley told media. “I know a lot of Albertans who love B.C. wine. Quite frankly, I’m one of them,” she said. But now, she’s encouraging her province’s fossil workers to consider some other beverage when they order at a bar or a restaurant. “Maybe choose some terrific Alberta craft beer instead.”

B.C. Premier John Horgan responded that his province “has the right to consult with citizens on the impact of diluted bitumen spills on the coastline,” CBC states.

“Our consultation on proposed new regulations hasn’t even begun, but Alberta has seen fit to take measures to impact B.C. businesses,” Horgan said. He urged Alberta to “step back from this threatening position,” adding that “we stand with B.C. wine producers, and will respond to the unfair trade actions announced today.”

“To clarify,” 350 Canada added [3] on its Facebook page, Alberta Premier Rachel Notley just attacked small B.C. businesses because a Texas oil company doesn’t want a scientific review of the potential for its massive tar sands pipeline to cause dangerous spills on the coast. This isn’t about Alberta versus B.C. This is about a politician bullying small business on behalf of Big Oil.”

In a post for National Observer, University of Alberta political scientist Laurie Adkin says [4] Notley’s “ill-fated strategy” of building B.C.’s independent scientific review into a constitutional crisis “is based on a set of questionable claims and assumptions. She frames it as a conflict between, on the one hand, a rogue and lawless B.C. government acting under pressure from the B.C. Greens and, on the other hand, the sensible, law-abiding governments of the rest of Canada which put the interests of jobs and prosperity first.”

By contrast, she notes, B.C.’s actual draft regulations “address spill response times, geographic response plans, and restitution to local communities in the event of spills of diluted bitumen on land or in coastal waters, and include a plan to appoint a scientific advisory panel.” And “even if all the claims of the Alberta government were true, they would be missing an unavoidable reality that calls for an entirely different approach to the current conflict”: That independent scientists haven’t accepted the safety assurances on which federal approval for the Trans Mountain pipeline expansion was based.

“Many would view the B.C. government’s desire to ascertain the feasibility and costs of remediating such spills as prudent,” Adkin writes, pointing to the costs B.C. would incur in the event of a major coastal spill. “Alberta governments have been content to allow the environmental [5] [and other [6]] liabilities [7] of oil and gas extraction to build up over decades without an adequate system in place to ensure that Alberta citizens will not be saddled with the clean-up costs; other governments may well take another approach.”

In B.C., meanwhile, federal Member of Parliament Murray Rankin (NDP-Victoria) accused [8] Prime Minister Justin Trudeau of “playing Russian roulette with our coastline” with his insistence that the controversial pipeline will be built. Trudeau says the project is in the national interest, but “British Columbia’s part of the nation as well,” Rankin told CBC. “We have legitimate concerns about the impact of spills on our tourism industry, on Indigenous rights, on any number of fishing interests, including endangered species.”

At last count, one of the leaders in the industry Notley is so avidly defending was planning [9] a 400-person reduction in its work force with the introduction of autonomous trucks.

I am one Albertan who is ashamed of my Provincial Government’s response to B.C. taking care and caution around a most valuable resources. I know jobs are at stake, but you can’t eat money. I certainly won’t vote for Priemier Notley again and I’m saddened that she has taken an action to pit Albertans against our neighbours in beautiful B.C. Is their a petition to sign somewhere?

Thanks, Donna. You can order B.C. wine! Have a look at the story in today’s Mix. From some of the email traffic we’ve seen over the last couple of days, I’m pretty sure someone outside your province would be happy to send you one or a few bottles. (We live in strange times if Notley’s action has briefly turned The Energy Mix into a promotional vehicle for a province’s wine industry!…maybe by 2050 they’ll be 100% reliant on renewables for all they do?)

[…] the support we were able to grow for this project in B.C.,” she said. “Instead of focusing on anger and division, they need to continue to build the consensus that we have been successful in building […]