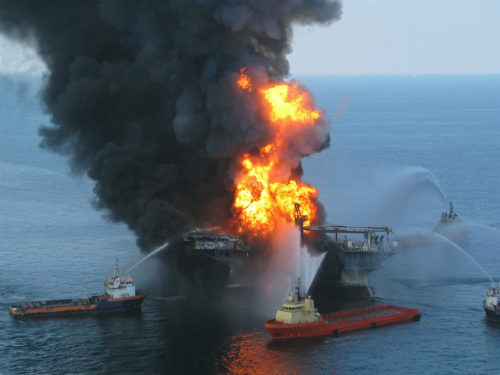 Global fossil giant BP Plc., fresh from recalculating the penalties it will pay for permitting a catastrophic 2010 explosion and well failure at its Deepwater Horizon drill site in the Gulf of Mexico, now wants to drill even deeper, more difficult offshore prospects in Canada’s maritime economic zone.

In a statement yesterday, BP said [1] it was taking a US$1.7-billion charge in the fourth quarter of 2017, and another of the same amount in 2018, that would add to the more than $61 billion in penalties [2] already levied against the company for its role in the disaster that killed 11 people, injured 17 others, and released 200 million gallons [3] of raw petroleum into the fragile Gulf of Mexico, doing long-lasting damage [4] to ecosystems and marine resources.

The “company faced more than 390,000 claims from businesses such as seafood producers and tourism providers following the oil spill,” Bloomberg reports.

BP Chief Financial Officer Brian Gilvary shrugged off the additional charge, saying it was “fully manageable within our existing financial framework, especially now that we have the company back into balance at [a world oil price at or above] $50 per barrel.”

DeSmog Canada reports [6] that BP, evidently undeterred by either the scale of the Deepwater Horizon catastrophe or its financial repercussions, now has its sights on the still relatively pristine waters off Nova Scotia. (The company has also returned [7] to the battered Gulf of Mexico.)

BP’s Canadian subsidiary “plans to drill up to seven exploratory wells off the southeast coast of Nova Scotia that are at least 3.5 times the distance from land and up to twice the depth of the well beneath the Deepwater Horizon offshore drilling rig,” DeSmog writes.

“The company’s proposed solution if a catastrophic blowout happens in Canadian waters relies on shipping a capping device from Norway, a process that is estimated to take between 12 to 19 days—but could take 25 days total to actually cap the well with the device,” the outlet adds. And that’s if all systems and logistics work as intended—in contrast to the catastrophic failures and delays that led Deepwater Horizon to spew product for 87 days [8].

“In the meantime, two critical fisheries and countless marine species would be seriously endangered. The Sable Island National Park Reserve is less than 50 kilometres away.”