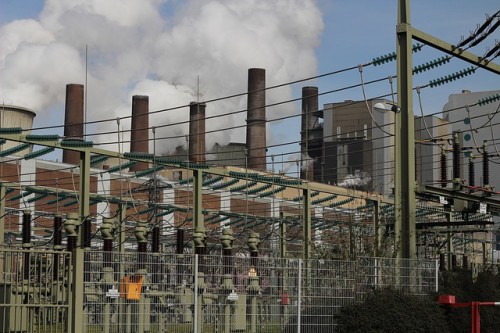 Donald Trump has made much of ending the “war” that he has long asserted was being waged against coal by the previous administration led by President Barack Obama. Now, the war that never was may be over, but by almost every account except the one coming from the White House, coal hasn’t stopped losing.

The Los Angeles Times leads its lengthy examination of the U.S. coal industry’s woes in a community with the Simpsonsesque name of Homer City, PA, site of a hulking coal generating station.

“Locals look out their windows to see if there are clouds drifting from its massive smokestacks, indicating the plant is still running,” the paper writes. “If they don’t see any, they wonder if plant owners have thrown in the towel for good.”

The plant will be a half-century old in two years, and “remains an albatross to investors,” the Times writes. And “it is likely to remain a loser financially [2], no matter how far Trump goes in rolling back regulations.”

As the paper notes, other coal facilities across the America are succumbing [3] despite the cessation of alleged government hostility. “A fresh round of closures expected to cost at least 850 jobs was announced by Vistra Energy in Texas, even as the administration launched its repeal of landmark regulations on plant greenhouse gas emissions.”

“Outwardly,” the Washington Post writes [5], “coal companies and their advocates have embraced Trump’s aggressive rollbacks as aids toward boosting production and creating jobs.” Privately, firms are scaling back, shedding workers [6], and declining opportunities the federal government now wants to give them.”

An illustration of the industry’s continuing vapours has been its weak response to Trump’s spring decision to scrap an Obama-era moratorium on issuing new leases to mine coal on federal land in the western U.S.

“In the six months since that announcement, companies have withdrawn five of 44 pending lease applications, and at least eight are indefinitely on hold,” the paper reports. “In a number of cases, companies have explained that their decisions are based on persistently weak market conditions.”

Arch Coal, the United States’ second-largest coal supplier, cited “continued downward pressure on [market conditions] and subsequent reduced output over the past seven years” in withdrawing an application for a new mine in Wyoming. Kiewit, a Fortune 500 mining company based in Omaha, withdrew applications for two new mines in the same state, “after waiting for years in the hope that market conditions would improve,” the Post notes. “This is hardly the picture of an industry on the rebound.”

However, the one [7] “the administration is pushing” is “even less politically popular,” the same paper adds. Energy Secretary Rick Perry request of U.S. federal regulators “to force regional electricity grids to purchase large amounts of coal” and nuclear power at elevated prices, the Times reports, “is getting a hostile reception. Oil and gas companies are joining [8] solar and wind advocates in working aggressively against it.”