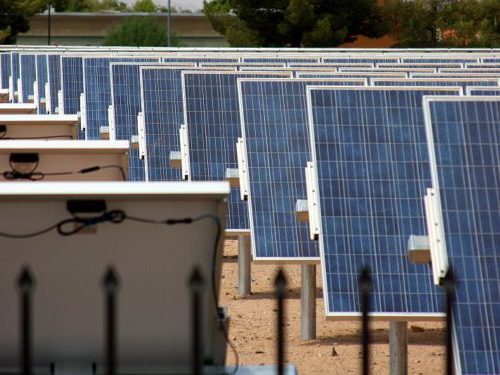 As 3.5 million people face weeks, likely months, without electrical power in the U.S. Caribbean territory of Puerto Rico, at least one analyst sees a “once in a lifetime” opportunity in the island’s response to devastation wrought by successive blows this month from Hurricanes Irma and Maria.

Meanwhile, Puerto Rico’s governor warned of an exodus if the United States government, which holds sovereignty over the non-state “commonwealth”, and recognizes its residents as American citizens while denying them a voting representative in Congress, does not step up relief efforts.

More than four in ten Puerto Ricans live in poverty. That has prompted some observers of environmental (in)justice, to question [2], with Inside Climate News, “whether the United States is prepared to come to the aid of poor and vulnerable communities that have contributed little to climate change.”

Donald Trump’s first post-hurricane tweets to address Puerto Rico, sent five days after Maria swept over the island, did little to reassure islanders with what CNN described [3] as their “staggering lack of empathy”.

“Texas & Florida are doing great but Puerto Rico, which was already suffering from broken infrastructure & massive debt, is in deep trouble,” Donald Trump wrote, continuing over several tweets: “It’s [sic] old electrical grid, which was in terrible shape, was devastated. Much of the Island was destroyed, with billions of dollars…. owed to Wall Street and the banks which, sadly, must be dealt with.”

Facing US$70 billion in debt, Puerto Rico’s territorial government filed for bankruptcy in May,  Bloomberg recalls [4]. “The fiscal collapse has effectively shut down Puerto Rico’s access to the U.S. bond market, promising to make it more difficult for it to borrow to rebuild.” Trump’s remarks, with their empathy for banks and infrastructure rather than the people devastated by the twin storms, suggested he saw no reason to lighten the territory’s debt load in light of its devastation.

It was apparent that Puerto Rico Gov. Ricardo Rosselló also harboured doubts about whether his disenfranchised island would get the help it needs.

“My fear is we’re going to have some side effects that are devastating both for Puerto Rico and the United States,” he said [5]. “Mainly, massive migration that would deteriorate our [economic] base here in Puerto Rico, and would provoke significant demographic shifting in other areas of the United States.”

With the island’s electricity grid shattered and many roads rendered impassable, “only a handful of municipalities have been able to make contact with San Juan or the outside world,” Politico adds. The commonwealth government resorted to human runners to reach out to isolated municipalities, amid reports of rising desperation.

In the north coastal town of Manati, “hysteria is starting to spread,” its weeping mayor José Sanchez Gonzalez told journalists after reaching the island capital of San Juan. “The hospital is about to collapse. It’s at capacity. We need someone to help us immediately.”

In San Juan, meanwhile, “streets were choked with traffic as people tried to find loved ones and spent hours waiting in line for gas,” the Washington Post reports [6]. “Shock has given way to frayed nerves as officials warned that it could be months before power is restored to some areas, and there is no indication of when communications infrastructure will be fixed.”

Although help began to arrive with the reopening of the island’s main port and the arrival Sunday of 11 ships bearing relief supplies, the prospect of months without electrical service drew attention both to the shaky state of the island’s pre-hurricane grid, and the options presented by the need to rebuild it.

Highlighting the damage was a break at one end of the earthen Guajeteca Dam. As water rushed out of its five-square-kilometre reservoir, carving an expanding breach in the 89-year-old barrier, some 70,000 people downstream were warned to evacuate or face flash flooding if the dam collapsed entirely. The dam’s reservoir was also used to generate hydroelectricity, and its weakened state mirrored that of much of the island power grid.

“The island’s infrastructure was in sorry shape long before Maria struck,” the Globe and Mail recounts [7]. The Puerto Rico Electric Power Authority (PREPA) “abandoned most basic maintenance in recent years, leaving the island subject to regular blackouts” while it sought unsuccessfully to reschedule repayment of more than $9 billion it owes to creditors.

Noting the unlikelihood of the utility now being able to pay for the reconstruction of the island’s power system while settling outstanding accounts with its creditors, the Institute for Energy Economics and Financial Analysis (IEEFA) optimistically spies “a once-in-a-lifetime opportunity for Puerto Rico to hit reset and choose a wise course forward in its own best interest.”

The island commonwealth “simply does not have the money to rebuild and pay $9 billion to major bondholders, who would do well now to take their losses and move on,” IEEFA analyst Cathy Kunkel observed. The destruction of its legacy grid, Kunkel argues, thus provides “an opening to eliminate a debt Puerto Ricans will never be able to pay off, and a moment to pause and take up an electricity system rebuild that would be far more resilient than the one it has.”

But IEEFA has another idea.

“We call for significantly greater investment in Puerto Rico’s abundant natural renewable energy resources. Greater reliance on microgrids and distributed solar systems (with backup storage) can make the island far less vulnerable to major storms than its current centralized generation model—or any new centralized model being contemplated in the wake of Maria.”