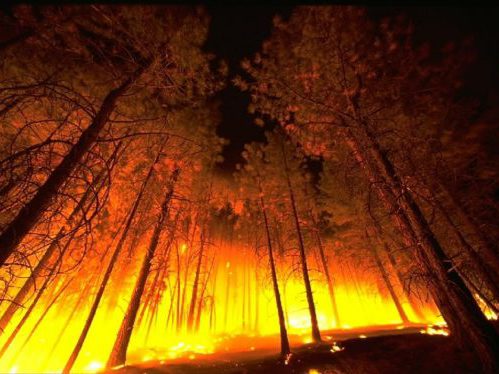 An extreme wildfire season across western provinces and states has emergency responders working overtime and communities on edge, as imminent evacuation alerts and soot-laden air combine into conditions that could soon become the new summer normal for the region.

“Extreme fire behaviour—difficult to predict and dangerous to fight—has been the watchword of the 2017 season across the [U.S.] West,” the New York Times reports. “More large, uncontrolled wildfires were burning in 10 Western states in early September than at any comparable time since 2006,” and Grist predicted [1] September 8 that some of those fires could still be burning by Hallowe’en.

While the U.S. has not yet declared a record fire season, despite 8.3 million acres burned, the blazes that have occurred “have leaned in, menacing more lives and property, by their size and their proximity, than in any recent season,” the Times notes. The results have been widespread and often devastating.

“Two firefighters died in Montana, and dozens of buildings and homes have been destroyed in California. About 150 hikers had to be rescued in Oregon when a fire encircled them. Evacuation orders—residents told to be ready to flee at a moment’s notice—reached to within 15 miles of downtown Portland. One of the largest fires ever recorded in Los Angeles County roared down from a canyon near Burbank, leapt a highway and forced hundreds of residents, from Burbank into Los Angeles itself, from their homes.”

Citing the NASA Earth Observatory, Wildfire Today reports [3] that atmospheric currents have carried smoke from North American wildfires has far as France, Spain, and North Africa. “It’s not that uncommon for smoke from fires in North America to reach Europe,” said NASA atmospheric scientist Colin Seftor, but this year’s clouds seem to be bigger, thicker, and more persistent. “It almost looks like it was flung across the Atlantic.”

In Canada, the British Columbia government has just lifted [4] a state of emergency that was first declared July 9, then extended nine times, but warns that the wildfire season is far from over. The fires have led to multiple evacuations and persistent air quality problems in many parts of the province.

And Alberta is right in the midst of the crisis, with one fire in the southwestern part of the province quadrupling in size in two days, to 42,000 hectares. “It is classified as ‘out of control’, and it will probably remain out of control for some time until we see a significant change in the fire behaviour,” wildfire information officer Leslie Lozinski said [5] of the Kenow blaze, which forced an evacuation and destroyed a visitor centre at Waterton Lakes National Park. Some families in the Waterton townsite only received a few minutes’ notice to get out.

“We’re living in heaven on Earth,” added [6] rancher Jim Garner, whose home and business were reduced to rubble. “Right now, it looks a bit like hell.”

On CityLab, University of Montana fire ecologist Philip Higuera explained [7] that the 2017 fire season may indeed be a taste of the new normal for the U.S. While the scale of this year’s fires has not been unique, “the main reason there is so much burning right now is the strong seasonal drought across the region,” he said. “The term we use is that these fires are ‘climate enabled’. The drought makes most of the vegetation, live or dead, receptive to burning. In Missoula, we had the driest July and August on record and the third-warmest July and August. With those types of conditions, we expect widespread burning. But people underestimate the role that seasonal climate plays in these events, and we start to grasp at lots of other things to explain it.”

The Times also attributes some of this year’s impact to changes in human settlements. “As the West becomes more and more populated, we’re seeing more and more homes being built in these areas; the baby boomers retire and they’re building these homes all over, in natural parts of the landscape,” said Bureau of Land Management spokesperson Jessica Gardetto. As a result, “we’re going to see more summers like this,” combining increased property loss with more widespread air quality problems and related health impacts.

But the Times notes that “shifting patterns in Western climate and weather also caught forecasters off guard.” Initial modelling for this year’s fire season showed heavy winter snows keeping the earth in many areas damp. “But then a severe heat wave settled in over a vast area from Montana to Northern California and across the Pacific Northwest, and some places went more than 100 days with no measurable rainfall. Most of Montana is suffering an extended drought. The heat and drought dried out grasses and shoots that had been nourished by the winter snows, turning them into tinder.

In the end, the early prediction “was completely the opposite of what actually happened.” said National Interagency Fire Center meteorologist Bryan Henry. “The long-range weather models that we had through the spring and toward summer, they were just flat-out wrong.”