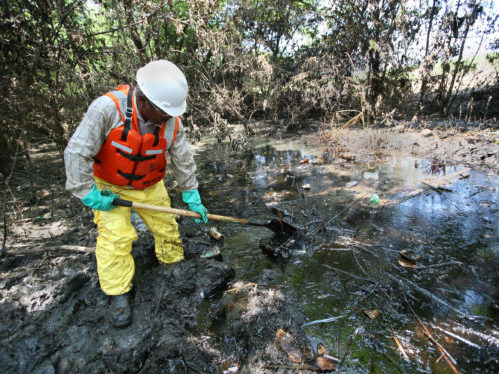 The three major pipeline companies now pushing to complete new infrastructure in Canada have collectively been responsible for one significant spill per week in the United States since 2010, according to a report and interactive map released last week by Greenpeace.

“Analysis of public data shows that the three companies proposing to build four tar sands pipelines—TransCanada, Kinder Morgan, Enbridge, and their subsidiaries—have seen 373 hazardous liquid spills from their U.S. pipeline networks from 2010 to present,” the organization reports. “Assuming these rates, the Keystone XL pipeline could expect 59 significant spills over a 50-year lifetime. Similarly, the Line 3 Expansion could see 51 significant spills over a 50-year lifetime.”

The study was based on data from the U.S. Pipeline and Hazardous Materials Safety Administration. It showed that the three companies’ pipelines have released 63,221 barrels of hazardous material over the last seven years, including 20,082 barrels of diluted bitumen that Enbridge spilled [2] into the Kalamazoo River in 2010. The U.S. Center for Biological Diversity published [3] a similar analysis of PHMSA data in 2014.

“Despite industry claims to the contrary, history shows that there is simply no safe way to transport fossil fuels, and pipelines are no exception,” writes [4] Greenpeace content producers Ryan Schleeter.

In fact, “the rate and volume of pipeline spills in the United States has increased in recent years, with devastating consequences for communities and our environment. In the past decade, U.S. pipeline spills have led to 20 fatalities, 35 injuries, US$2.6 billion in costs, and more than 34 million gallons spilled. That’s an average of 9,000 gallons of hazardous liquids spilled every single day for ten years.”

“That track record is very worrying and should send alarm bells out to every single community along the pipeline routes,” added [5] Edmonton-based Greenpeace Canada campaigner Mike Hudema.

But the Greenpeace study “also highlights the absence of comprehensive, accessible, and easy-to-understand data on pipeline spills in Canada,” the National Observer reports.

“In Canada, pipeline databases really leave a lot to be desired,” Hudema said, with each province taking responsibility for its own data. “It would be great to have a standardized federal database,” he told the Observer. “It’s important to have just an overall snapshot of, where is Canada’s pipeline safety?”

2 Comments To "Three Big Pipeliners Responsible for One U.S. Spill Per Week Since 2010"

No link to the purported report – not one detail of the claimed deaths as to whether they were gas or propane or what. No definition of “significant”. I sure would not rely on this thin gruel. How do they define a “pipeline spill”?

Actually, the link to the source material is on the page — go to the top of the story and click on ‘Greenpeace USA’. That’s standard format for anything we publish on The Mix, since a big part of our purpose is to point readers to more detailed source material they might otherwise miss.