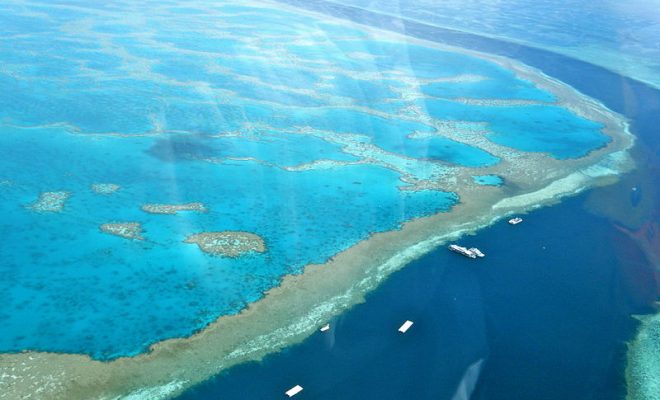 Australia’s Great Barrier Reef may finally be on the verge of being declared a “world heritage site in danger”, over the strenuous objections of the federal and Queensland governments, after a key advisory committee determined the country can no longer protect the reef due to the effects of climate change [1].

“In a meeting of the Reef 2050 advisory committee, whose role is to provide advice to state and federal environment ministers on implementing the plan, two experts from government science agencies said improving the natural heritage values of the reef was no longer possible,” The Guardian reports. After unprecedented, back-to-back bleaching events in 2016 and 2017, “the experts told the meeting the plan should be revised to aim for something more achievable, suggesting it could aim to ‘maintain the ecological function’ of the reef, while accepting that its overall health would inevitably decline.”

“The concept of ‘maintaining ecological function’ refers to the balance of ecological processes necessary for the reef ecosystem as a whole to persist, but perhaps in a different form, noting the composition and structure may differ from what is currently seen today,” said a spokesperson for the Great Barrier Reef Marine Park Authority, one of the organizations involved in the presentation.

“There is great concern about the future of the reef, and the communities and businesses that depend on it, but hope still remains for maintaining ecological function over the coming decades,” agree the Independent Expert Panel, a group that advises on the implementation of the Reef 2050 plan.

“Members agreed that in our lifetime and on our watch, substantial areas of the Great Barrier Reef and the surrounding ecosystems are experiencing major long-term damage which may be irreversible unless action is taken now,” the panel said in a communiqué.

“There’s a real risk that this new information will cause a renewed scrutiny for what Australia is or is not doing to protect the reef—particularly around climate change,” he said. If continuing degradation led to the reef losing its world heritage status, “that would be a tragic situation.”

Imogen Zethoven of the Australian Marine Conservation Society noted that “climate change is the single biggest threat to our reef. Yet the government is aggressively backing the reef-wrecking Adani coal mine [3], and its climate policies are shameful.”