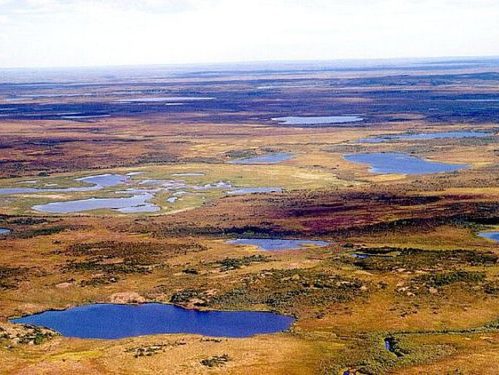 Up to 7,000 “bubbles” caused by melting permafrost across Siberia’s Yamal and Gydan peninsulas could soon begin releasing their climate-busting methane into the atmosphere, the Siberian Times reports, citing a release by the Russian news agency TASS.

Siberian permafrost bubbles aren’t news, but the total of 7,000 “is startlingly more than previously known,” the Times notes. The story features video of a researcher prodding the permafrost to show the instability of the gas deposit beneath.

“The region has seen several recent examples of sudden ‘craters’ or funnels forming from pingos after what scientists believe are caused by eruptions from methane gas released by the thawing of permafrost which is triggered by climate change,” the newspaper notes.

The Ural branch of the Russian Academy of Sciences also cited thawing permafrost as the suspected cause of the craters.

“At first such a bump is a bubble, or ‘bulgunyakh’ in the local Yakut language. With time the bubble explodes, releasing gas,” said Alexey Titovsky, director of the Yamal department for science and innovation.

“We need to know which bumps are dangerous and which are not,” he added. “Scientists are working on detecting and structuring signs of potential threat, like the maximum height of a bump and pressure that the earth can withstand.”

Scientists are concerned the bubbles could harm roads and infrastructure in Yamal, which the Times describes as “a key energy production region”. The area was abnormally warm last summer, with air temperatures reaching 35°C.

Despite the methane bomb on its own territory, and the recognition of the threat by its own news agency and science academy, Russia is still seen as a potential partner in an “axis of inaction” working to impede implementation of the Paris climate change agreement. (h/t to The Energy Mix subscriber Ralph Torrie for pointing us to this story)