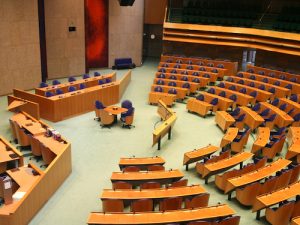 The Netherlands’ GreenLeft Party nearly quadrupled its popular vote and increased its seats in the country’s parliament from four to 14 as “pro-environment parties that prioritize tackling climate change” won big in national elections Wednesday.

Incumbent Prime Minister Mark Rutte soundly defeated ultra-nationalist Geert Wilders in a campaign that was widely seen as a measure of public support for the right-wing populism that propelled Donald Trump to power late last year. “This is a chance for a big democracy like the Netherlands to make a point to stop this toppling over of the domino stones of the wrong sort of populism,” Rutte said. The Guardian reports it could now take months for Rutte to negotiate a coalition government, and 30-year-old GreenLeft leader Jesse Klaver “could now play kingmaker in coalition talks.”

GreenLeft Chair Marjolein Meijer called the seat count “a fantastic result for us, a historic victory,” showing “very fertile ground in the Netherlands for change and a positive and hopeful story”. The GreenLeft and the progressive D66, described by The Independent as the two most pro-EU parties, both saw big gains in popular support.

In Amsterdam, exit polls showed the GreenLeft in the lead and Wilders’ PVV party in sixth place, with just 7% of the vote.

Even before exit poll results began to trickle out, Klaver urged “left-wing friends in Europe” to “stand for your principles”, advising his counterparts across the EU to “be straight. Be pro-refugee. Be pro-European.”

The Dutch election unfolded on the same day that the Port of Amsterdam unveiled a sustainability strategy under which it will stop handling coal by 2030.

“In pursuing this strategy, we are deliberately and literally making room for the development of new activities and innovations,” CEO Koen Overtoom said in a statement.“This is sensible from an economic point of view and more sustainable, as well as promoting employment.”