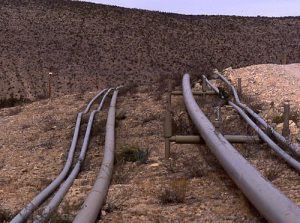 Canada’s second-largest pipeline company has secured a number of new 10-year shipping commitments for gas by lowering its tolls from around $2.00 to $0.77 per gigajoule, JWN Energy reports. The industry news outlet predicts the cut rate will allow gas produced in British Columbia’s Montney and Alberta’s Duvernay regions to recapture market share in Ontario that had been lost since 2006 to U.S. supplies from less distant fields in Ohio, Pennsylvania, and Virginia.

“It’s a big deal,” fossil energy investment analyst Jackie Forrest told JWN. “It’s almost equal to an LNG [export] project in some ways, because if we hadn’t got this it’s very likely we would have lost more than one billion cubic feet a day of market over the next year or two. By having this deal, we’re going to maintain those flows.”

TransCanada had previously sought to tempt shippers in October by offering to lower tolls to “a range of $0.75/GJ to $0.82/GJ depending on the shippers’ contract volume commitments,” JWN notes, but the offer “didn’t get enough support from producers to move forward.”

B.C. Natural Gas Development Minister Rich Coleman welcomed the clearcut price drop and accord with shippers, saying it was “nice to see the level of cooperation between gas producers and TransCanada to establish a competitive toll structure that will ensure B.C. natural gas can be delivered to Eastern Canada at a competitive cost.”

The toll reduction still needs approval from Canada’s National Energy Board, which the company says it hopes to secure in time to introduce the new rate before November 1. “There’s no requirement for any build, so our producers can access the market upon NEB approval,” TransCanada’s senior vice president of Canadian gas pipelines, Tracy Robinson, told Reuters.

However, the courts may put a wrinkle in TransCanada’s timeline. Earlier this year, two northern Ontario First Nations filed suit and sought an injunction against TransCanada for work it planned to conduct on a portion of the Mainline that runs through their traditional territories.

The Aroland and Ginoogaming First Nations contend the work “will cause impacts to the First Nations’ culture, their sacred relationship to the land that is at the core of their identity as Indigenous communities, and on their ability to continue to survive with the land.” The two nations also name the National Energy Board and the government of Canada as defendants in their suit.