No Country Would Leave 173 Billion Barrels in the Ground, Trudeau Tells Fossils 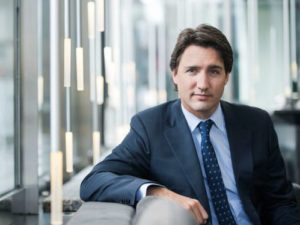 Prime Minister Justin Trudeau’s attempt at an “all of the above” energy and climate strategy was on display in Houston last week, as he accepted an environmental leadership award from a major oil and gas industry conference and declared he would succeed on energy where two past PMs—including his father—had failed.

“No country would find 173 billion barrels of oil in the ground and just leave them there,” Trudeau told participants in a keynote address to the annual CERAWeek event, the first ever by a Canadian prime minister. “The resource will be developed. Our job is to ensure this is done responsibly, safely, and sustainably.”

Trudeau said his father’s National Energy Program “hurt both growth and jobs,” while Stephen Harper’s Conservative government “failed to understand that the economy and climate change are linked,” CBC reports.

“Our immediate predecessors tried a different route for 10 years, to ignore the environment,” Trudeau said. “It didn’t work, any more than the NEP of the 1980s worked. They couldn’t move forward on big energy projects.”

The PM stressed the massive energy trading relationship between Canada and the United States, noting that the country is the leading source of U.S. imports of uranium and electricity, as well as oil and gas. In the years ahead, he said, “all paths to prosperity in Canada involve a thriving, vibrant energy sector—both traditional and renewable.”

“When we go camping, we light our fires before the sun goes down. And that doesn’t mean we’re anti-daylight,” he added. “It’s exactly the same with energy. Innovating and pursuing renewables isn’t somehow in competition with those traditional resources.”

A day later, Trudeau said the environmental regulations his government is developing will give fossils the certainty they need to invest in Canada over the long term, the Globe and Mail reports. “The one thing I have heard consistently from leaders in the energy industry is the need for clarity,” the PM said. Once suitable environmental oversight is in place, “we are going to see many people invested and interested in partnering in drawing on Canadians’ great natural resources.”

He touted “the responsible, thoughtful, long-term approach that Canada is taking to reducing regulations by increasing public confidence in regulators, and indeed in industry.”

While he was in Houston, Trudeau also warned that a hefty import tax proposed by the new U.S. administration, ostensibly designed to protect American jobs, would hurt the country’s energy, steel, and auto industries, all of which depend on bilateral cooperation. “A border adjustment tax would be bad not just for Canada but for the United States, as well,” he told media Friday. “No two countries in the world have the close friendship, alliance, relationship, and level of economic integration that Canada and the U.S. have.”