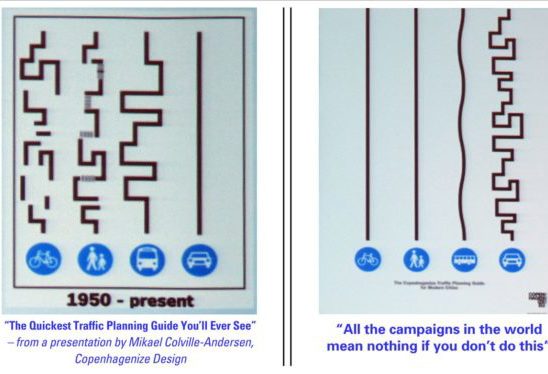 A reliance on cars is built into the way city streets are built, and a different approach could be the key to making communities more bike- and pedestrian-friendly, consultant Mikael Colville-Andersen told a late February workshop at the Ontario Good Roads Association conference in Toronto.

“Design played a big role in cementing the dominance of cars in our reshaped cities by specifying wider—and faster—turning radiuses, ring roads, multi-lane arterial roads, and even expressways built right through old neighbourhoods,” Resilience.org reports. “The predictable result, Colville-Andersen says, is that most urban dwellers do not feel safe biking on city streets.

Just as predictably, “biking rates go up rapidly as soon as a usable network of safe infrastructure is established.”

Colville-Andersen, a Canadian now based in Denmark, says there’s no point urging people to ride their bikes to improve their own health or protect the environment. In Copenhagen, where more than half of commuters are regular bike riders, “repeated polls have found that most people choose to bike simply because that’s the quickest and most convenient way to get around,” Resilience notes. “And that’s no accident—it reflects a 40-year-old prioritizing of active transportation, with the goal of making walking and biking safe and convenient, while making driving less convenient.”

The article contrasts typical city street designs of the last 60 years—in which cars get the straightest line from origin to destination, and all other modes are less convenient—with an approach that favours pedestrians, bikes, and transit. “All the campaigns in the world mean nothing if you don’t do this,” Colville-Andersen said.

“Cartoonish in its simplicity, it nevertheless summarizes what many people experience daily,” Resilience writes, referring to two schematics the urban designer presented during his talk.

In conventional city design, “bike networks are disjointed snippets of little use to commuters on bike. Sidewalks and other walking routes also include frequent jogs to accommodate motorways. Bus routes have continuous runs but often wind around cities wasting their occupants’ time—while car and truck routes are made as straight and fast as feasible.”

In “best practice” cities like Copenhagen, by contrast, “bike routes and walking routes are made as convenient and efficient as possible, with public transit routes next in priority. Meanwhile many jogs, detours, narrow lanes, and other traffic calming designs intentionally slow motor traffic. This not only makes biking and walking much safer in those inevitable intersections, but also gives drivers daily incentives to stop using their costly and slow cars.”