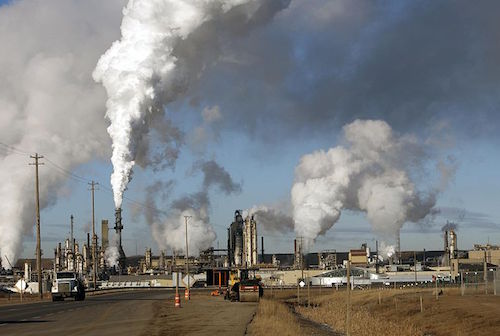 Alberta’s tar sands/oil sands producers will blow through Premier Rachel Notley’s promised cap on the sector’s annual emissions in less than a decade, even as they continue to add another 43% to their collective capacity, according to studies by a leading bank and a Calgary-based think tank.

“Both BMO Capital Markets and the Canadian Energy Research Institute (CERI) predict that total oilsands production will reach about four million barrels per day in the 2025 timeframe—up from an expected 2.8 million barrels per day this year,” industry news source JWNEnergy reports. “Around the same time, the sector will break through the 100-megatonne-per-year limit.”

The cap has been criticized for accounting for a fifth of Canada’s remaining carbon budget by 2030.

According to JWN, BMO concluded, “based on current emissions and our production outlook,” that the cap will be “breached by 2025-2026.” By 2030, the sector will be emitting at a level 10% above the cap.

Higher output of diluted bitumen from the tar sands/oil sand region “makes international [climate] commitments increasingly difficult to meet,” CERI finds. “Thus there is interest in reducing the amount of GHGs emitted to extract bitumen from the oilsands and generate synthetic crude oil.”

Another study cited by JWNEnergy is particularly optimistic about this prospect. “CO2 emission intensity has the potential to decrease by ~35% with technology that has shown strong results on pilot application,” financial analysts with CIBC World Markets wrote, “and potentially up to ~70 to ~80% from higher-risk recovery schemes.”

With those innovations still mostly on the drawing board, however, a number of tar sands/oil sands operators are already anticipating the first new expansions on their way to achieving JWN’s cap-busting projections.