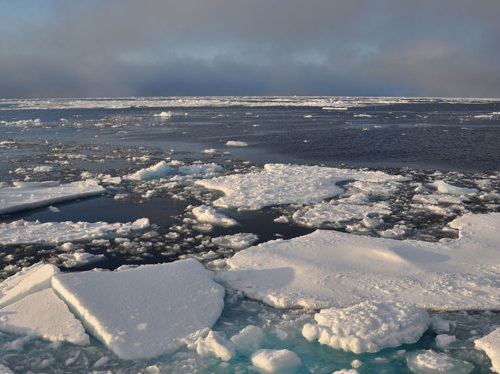 A livid tongue of red, representing unseasonably warm air, licking repeatedly over an outline map of the Arctic Ocean in computerized weather visualizations for the week ahead, dramatizes a polar climate trend that scientists are describing as “beyond even the extreme,” Brian Kahn reports for Climate Central.

The animated weather visualization, compiled at the University of Maine, is embedded in Kahn’s post, which traces a succession of dramatic recent milestones in the Arctic’s climate.

“Sea ice hit a record low maximum last winter (for the second year in a row, no less), and the second-lowest minimum ever recorded last fall,” Kahn writes. “After a fairly rapid refreeze in late September, sea ice growth reversed in November. Temperatures reached the melting point at the North Pole in December. Preliminary data from January indicates the Arctic was up to 35°F above normal in some locations.”

Now, a hurricane-strength low-pressure system southeast of Greenland is pushing up waves as high as 14 metres and driving counter-clockwise winds that are sending a stream of relatively warm southern air into the Arctic Ocean basin. “Temperatures are forecast to reach the melting point in Svalbard, Norway, an island between the Greenland and Karas Seas,” he notes. “The North Pole could also approach the melting point [again] on Thursday.”

“Together, these all indicate that the Arctic is in crisis,” Kahn concludes. “It’s the most dramatic example of how carbon pollution is reshaping the planet, and scientists are racing to understand what comes next.”

The most alarming of those “coming next” possibilities, researchers warn, is the weakening and potential eventual shutdown of the Atlantic Meridional Overturning Circulation (AMOC). The vast ocean current (the Gulf Stream is a part of it) transports huge amounts of heat from equatorial latitudes to northern ones, giving the British Isles their moderate climate, among other benefits.