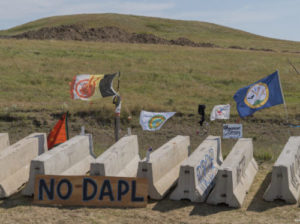 Even before U.S. President Donald Trump signed executive orders to hurry the completion of the Dakota Access Pipeline, the Sioux tribe whose resistance to the project caught global attention last year was urging the protesters still camped near its Standing Rock reserve to strike their tents and leave.

During the peak of activism against the US$3.8-billion pipeline, the protest camp was estimated to hold more than 2,000 people. Local officials cited by CBC News said between 300 and 500 people still remain in three camps.

The Standing Rock Sioux tribal government had been urging them to leave since the Obama administration agreed in November to review the environmental impact of the DAPL’s planned crossing beneath the Missouri River, and to examine other routing options. (Neither promise is certain to be kept by the Trump White House.)

However, a statement published on the tribe’s Facebook page January 20 said: “We ask the protectors to vacate the camps and head home with our most heartfelt thanks. Moving forward, our ultimate objective is best served by our elected officials navigating strategically through the administrative and legal processes.”

“I’m worried that the most recent behaviour, this action on the bridge, is going to give reason for the incoming president to do away with the thing that we worked so hard for,” tribal chair Dave Archambault added in one interview. “Our tribal members have said, ‘Enough now.’”

While the removal of protest camps and Trump’s executive intervention may now allow Houston-based Energy Transfer Partners to finish the last incomplete section of its four-state, 1,886-kilometre conduit, it doesn’t end the company’s problems.

“A group of about two dozen North Dakota landowners” is suing the company “for alleged deceit in acquiring land easements,” the Bismarck Tribune reports. “Landowners in Iowa await a state judge’s ruling in another easement case [and] other court battles are playing out in federal court in North Dakota and Washington, D.C.” The suits claim the company used “unfair tactics and fraud” to persuade landowners to sign right-of-way agreements for less money than they should have received.

On the other hand, Trump’s actions may move Calgary-based Enbridge Inc. off the fence after it delayed a $US2 billion investment that would give it and joint venture partner Marathon Petroleum Corporation a 37.5% interest in the pipeline.