2017 Could Be Death Knell for Kinder Morgan, Analyst Warns 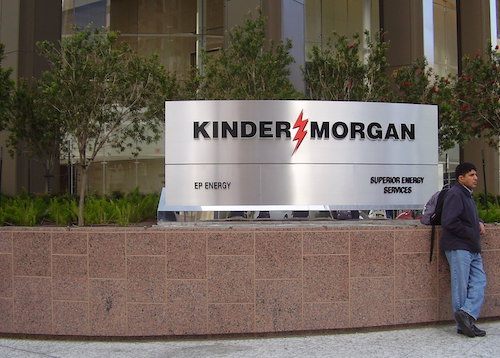 Rising project costs and regulatory delays could imperil Kinder Morgan’s intensely controversial Trans Mountain pipeline expansion by the end of this year and undermine the company’s wider efforts to rebuild its finances, according to a Texas-based investment analyst who says his due diligence on Kinder “uncovered key concerns that alarmed me greatly.”

With the numbers and timeline behind the project becoming more and more tenuous, warns David Alton Clark on the Seeking Alpha investment site, “the cancellation of the Trans Mountain project would essentially be a death knell for Kinder Morgan.”

Megaprojects almost always come in late and over budget, Clark writes. (Analysts at Ernst & Young would agree.) Kinder’s problem is that Trans Mountain has already hit the ceiling on cost, and will run out of time if it doesn’t receive final regulatory approval by the end of this year.

“Kinder Morgan has a solid plan to get out from under its huge mountain of debt,” he concedes, but “the successful completion of [the] Trans Mountain Expansion Project is a key part of that plan.” Clark says he got nervous when he dug into the details of the pipeline deal, citing a 2015 post from the National Observer as a primary reference.

“Not exceeding the C$6.8-billion limit is critical to the viability of the project,” he explains, because “$6.8 billion represents the upper limit of costs the project can incur while still maintaining contracts with shippers…The pipeline’s customers have the ability to back out of their contracts, or renegotiate rates with Kinder Morgan, if the cost goes over $6.8 billion or the regulatory approval is pushed past the end of 2017.”

All of which looks more likely than not when you consider the uncertainties that still plague the project. Trans Mountain “is getting more and more expensive by the day,” and “we are nowhere near tallying up all the costs yet,” he writes. “Tunneling through Burnaby Mountain, changes in scope, thicker pipe, routing changes, and the strong dollar are listed as the primary culprits.” And “there is still a great divide between [Alberta and British Columbia] at present regarding two main issues—an environmental plan for marine mammals. and financial agreement.”

The tight timeline also gives Clark reason to fret about the array of community interests still determined to fight the project. “The mayors of Vancouver, Victoria and Burnaby still oppose the project. Many First Nations oppose it, as well, and have already filed multiple lawsuits. Furthermore, Greenpeace Canada, Sierra Club BC, and Raincoast Conservation also oppose the project.”

He cites Washington tribes’ recent defeat of the Cherry Point coal terminal and the campaign by the Standing Rock Sioux and their allies against the Dakota Access Pipeline, arguing that “if the protesters succeed in significantly delaying [Trans Mountain] it may fall under its own weight,” just as lost time could prove fatal to DAPL. Last November, ex-B.C. premier Mike Harcourt warned that the Trudeau government “could be facing a Clayoquot or North Dakota type of insurrection” along the last leg of the Trans Mountain project if it isn’t rerouted—a move that would push the project above its $6.8-billion ceiling.

What many analysts have missed, Clark adds, is how important the project is to Kinder Morgan’s growth and cash flow—and, ultimately, to its survival. “The Trans Mountain expansion represents an increase in cash flow of six times what it currently generates on only a three-fold increase in capacity,” he explains. “The financial windfall for Kinder Morgan was approved by the [National Energy Board] and effectively doubled the toll rates charged on the current pipeline volume. So it’s very important to increasing Kinder Morgan’s ability to dig its way out of debt.”

The project is tying up nearly 60% of the company’s capital budget, and its completion has already been delayed to December 2019, when it was supposed to start contributing to the company’s cash flow and reducing its debt load in 2017.

“I believe the Trans Mountain pipeline will be completed at some point,” Clark writes, but “I seriously question the current projected cash flows from the project and the completion date. I expect a substantial revision downward of the project’s distributable cash flow once it’s all said and done, particularly if a joint venture partner is brought in.” In the end, Kinder might get rid of some of its debt, but it’ll also have to give up much of the revenue on the project.

“Once everyone receives their ‘fair share’ of the profit pie, there may not be as much left over for Kinder Morgan as originally forecast.”

Clark isn’t the only one keeping a watchful eye on Kinder Morgan. Reuters reports that the company has now missed its revenue targets for nine straight quarters, although its quarterly profit, at US$170 million or 8¢ per share, was an improvement over its $721-million loss last year.

“Pipeline companies, once seen as more insulated from commodity price swings due to fixed-fee contracts, were hit hard by a more than 60% slump in oil prices since mid-2014, as cash-strapped oil and gas companies renegotiated their contracts,” the news agency notes.

But none of these concerns seem to have filtered through to front-line investment advisors, two-thirds of whom still see Kinder Morgan as a stock worth buying, reports the Market Realist blog. “According to Kinder Morgan, it has a significant backlog of capital projects,” the site states. “As these projects are placed into service, the company will generate additional cash flows which can be used to increase dividends in the future.”