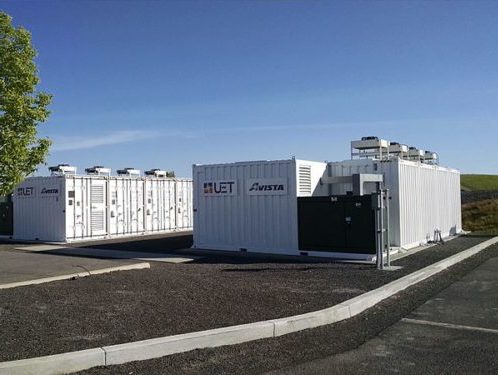 The longest-running closing argument in almost every assault on renewable energy is the one that begins, ‘the sun doesn’t shine all the time.” Well, no. But setting aside other counter-arguments (looking at you, grid management), the reality of an increasingly affordable suite of solutions is expected to blow in a banner year for energy storage technologies across Canada and North America.

The geophysical fact is that the two most popular and cheapest sources of renewable (or increasingly, any kind of) energy—wind and sun—are intermittent. As solar and wind generation work their way more deeply into utilities’ supply mix, that intermittency must be coped with—or continue to provide a rationale for the use of fossil generation.

In response, the Canadian Press reports, investment is chasing a wave of old and new technologies for storing energy.

“Where renewables go, storage will follow,” said Northland Power Project Manager John Wright. The company is repurposing an abandoned and flooded mine perched above Marmora, Ontario as the reservoir basin for a $900-million, 400-megawatt pumped storage facility.

Alberta’s main electrical utility, TransAlta, is also expanding a pumped storage facility that will add 600 to 900 megawatts of fast-response generation capacity. Meanwhile Toronto-based Hydrostor “is piloting a project with Toronto Hydro where air is compressed using power and pumped into underwater balloons sitting on the bottom of Lake Ontario. When the power is needed, the water pressure helps push the air back out through turbines and the power is sent to the grid.”

Chuck Farmer, director of stakeholder and public affairs for Ontario’s Independent Electricity System Operator, sees energy storage “participating on an even footing with all the other things that provide services and energy, and we think it will get there in relatively short order.”

Similar optimism is apparent in the United States, where Utility Dive declares that “2017 will mark the year commercial-scale storage expands beyond early adopter trials.” At least 10 U.S. states are on track to implement utility-scale storage, including battery-based storage, this year.

Driving adoption isn’t just the intermittency of sun and wind, but the desire of large power consumers for more control over their security of supply.

“Commercial and industrial customers are demanding software-driven energy storage services to enable control over their energy decisions, just as regulators and utilities across the country increasingly recognize the unique capabilities of these distributed resources,” Utility Dive reports.

“Smart project financing and dropping costs will only accelerate this pull,” the industry news outlet predicts. “Expect to see significant adoption among Fortune 500s and household brand names in the coming year. And we’ve only scratched the surface.”