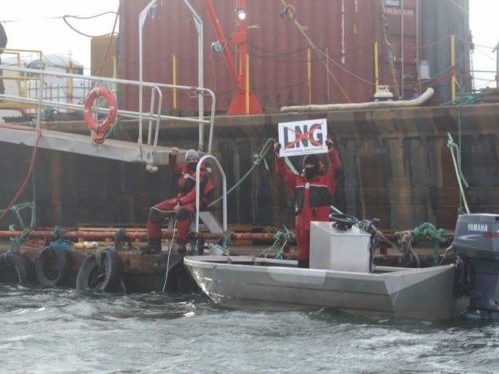 “We have a message for the Pacific Northwest LNG project’s investors in Asia,” said Yvonne Lattie, Gitxsan Hereditary Chief of Wilp Gwininitw, during a Vancouver news conference last Tuesday. “Sell your stock.”

There’s a legal claim for the Gitxsan to make, she added, because “the Canadian government’s decision to approve this project did not respect our fishing rights protected under the Canadian Constitution.”

Lattie and the Gitxsan Hereditary Chief of Wiip Luutkudziwuus, Charlie Wright, filed the claim on behalf of 650 members of various clans, the National Observer reports. Salmon “is vital not only for First Nations, but for the survival of many, many peoples,” she said. “It’s vital for our economy, and I don’t know if anybody has ever thought this, but it’s also vital for our wildlife.”

The challenge “builds on similar three lawsuits announced last October, filed in Federal Court by the Gitanyow and Gitwilgyoots tribes, and the SkeenaWild Conservation Trust,” the Observer notes.

Two days later and two time zones to the east, the Assembly of Manitoba Chiefs was filing for judicial review of federal approval of Enbridge’s Line 3 pipeline replacement project.

“Canada committed to restoring public confidence and modernizing the [National Energy Board] with a specific focus on Indigenous and traditional knowledge,” said Grand Chief Derek Nepinak. “Instead, the Enbridge Line 3 decision is founded upon a process that marginalized Indigenous voices and legal orders.”

He added: “It is unfortunate we have to go to court when there clearly is no political will with the current federal government to live up to Prime Minister Trudeau’s comment that no other relationship is as important as the one with the Indigenous people in Canada.”

In a release, Nepinak “said the Great Binding Law—which was the outcome of ceremonies by Indigenous elders in June pondering the future of tar sands and pipelines through ancestral lands—should have been part of the NEB report and the federal Order in Council” that allowed the project, CBC reports.