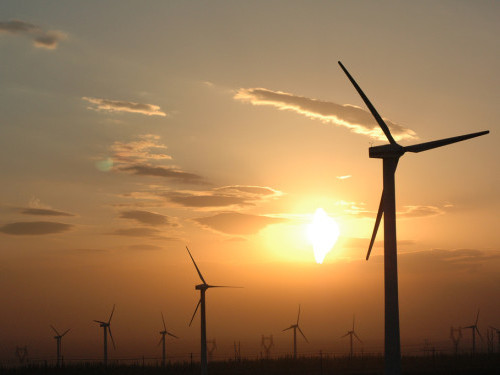 China’s National Energy Administration (NEA) has unveiled plans to invest ¥2.5 trillion (US$361 billion) in wind, hydro, solar, and nuclear generation through 2020, an initiative that will create 13 million jobs and contribute about half of the new electricity the country brings online by the end of this decade.

“The investment reflects Beijing’s continued focus on curbing the use of fossil fuels, which have fostered the country’s economic growth over the past decade, as it ramps up its war on pollution,” Reuters reports. Under a five-year plan released last month by China’s National Development and Reform Commission, “solar power will receive ¥1 trillion, as the country seeks to boost capacity by five times. That’s equivalent to about 1,000 major solar power plants, according to experts’ estimates.”

The Commission saw ¥700 billion allocated to wind farms, ¥500 billion to hydro, and the remainder to tidal and geothermal, the news agency states. “The government may exceed these targets because there are more investment opportunities in the sector as costs go down,” said securities analyst Steven Han at Shenyin Wanguo.

The rest of China’s new generation over the next four years will come from coal, Reuters notes—and despite a world-leading development boom, the NEA acknowledged that renewables will only account for 15% of total demand by 2020. Even so, ClimateHome reports that the NEA’s five-year plan “might have once again raised ambitions for its low-carbon future, highlighting the urgency that this smog-ridden country attaches to moving away from fossil fuels.” While many of the targets in the plan “are in line with the existing thinking of previous announcements,” it suggests that policy-makers are “even more determined to squeeze out coal’s share in the country’s energy mix, lowering its 2020 percentage in primary energy consumption from 62% to 58%.”

Then again, ambitious targets “do not necessarily translate into results,” notes correspondent Ma Tianjie. China is still building new coal facilities in spite of a serious problem with over-capacity, he writes, prompting regulators to consider a two-year freeze on new plant approvals. But so far, the country is keeping much of its existing renewables capacity off the grid, due to a combination of transmission bottlenecks and the design of the electricity market.

Yuan Ying, assistant manager of Greenpeace East Asia’s climate and energy campaign, said the new NEA plan “presents the framework to push forward the transition away from coal and towards renewable energy.” But to make it a reality, “China must push for more installation of wind and solar and get serious about tackling the enormous wastage of clean energy, which will also help propel a faster reduction in coal consumption.”

Greenpeace notes that in “the first three quarters of 2016, China saw an average of 19% curtailment of wind power, reaching as high as 46% in Gansu province. Gansu and Xinjiang provinces saw solar curtailment rates of 39% and 52%, respectively, in the first quarter of 2016.” But by designating central and eastern provinces as the location for 58% of new wind capacity and 56% of new solar, the plan “will increase efficiency by bringing energy generation closer to the market, and will go some way to tackling the curtailment problem.”

“China is preparing to go big on the only major new source of sustainable high-wage employment in the coming decades,” he writes. “China is already doing way better than the U.S. in this regard, and President-elect Trump’s commitment to opposing clean energy will not make things any better. As the International Renewable Energy Agency (IRENA) reported last year, China already has over 40% of all jobs in renewables, globally, while the U.S. has under 10%.”

“The change in leadership in the U.S. is likely to widen China’s global leadership in industries of the future, building China’s dominance in these sectors in terms of technology, investment, manufacturing, and employment,” agreed the Institute for Energy Economics and Financial Analysis in a broader sector study released last week.

“If the U.S. is serious about stimulating manufacturing-based growth, clean energy isn’t a sector to turn away from.”