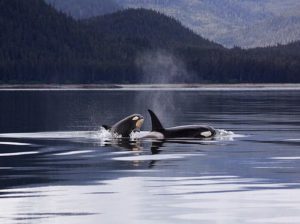 The science says their confidence is reckless.

“Nobody knows how a spill of diluted bitumen would affect marine life or whether a bitumen spill in salt water could be adequately cleaned up, because basic research is lacking,” DeSmog Canada reports, citing a peer-reviewed paper published late last month in the journal Frontiers in Ecology and the Environment.

Wendy Palen, an associate professor in biological science at Simon Fraser University and one of the report’s authors, called the two governments’ claims that a marine spill of diluted bitumen can be effectively mitigated “unfounded.”

Citing Palen, DeSmog says there have been no “ocean-based studies of how bitumen behaves in the marine environment, with rough seas and changing temperatures.”

“That means that the approval of new projects is problematic, maybe even bordering on irresponsible,” Palen told DeSmog. “Any new approvals of pipelines or transportation proposals are assuming a large amount of risk.”

The Trans Mountain pipeline expansion, approved by Trudeau’s cabinet last year, would triple the capacity of the existing line and increase tanker traffic through the Strait of Juan de Fuca to Vancouver from about five transits a month to 34.

“Pipeline opponents fear that a catastrophic oil spill is inevitable,” DeSmog writes. Nonetheless, “Prime Minister Justin Trudeau insists the project would have been rejected if he believed there were any threat to the B.C. coast.”