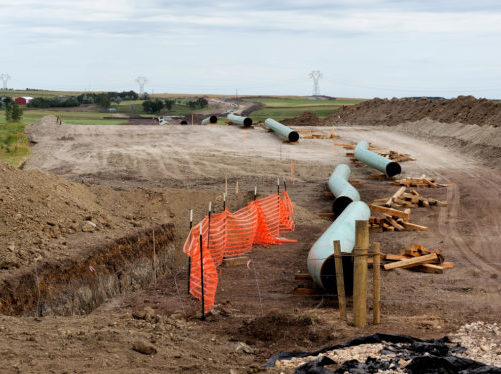 The financing behind the intensely controversial Dakota Access pipeline became a little more uncertain at year’s end, as joint venture partners Enbridge Energy Partners L.P. and Marathon Petroleum Corporation filed for a three-month extension on their plan to buy a major stake in the project.

The two companies “now have until March 31 to back out of the deal, according to a recent Securities and Exchange Commission filing,” the Duluth News Tribune reports. They had planned to pay US$2 billion for a 49% stake in Bakken Holdings Co. Ltd., which would give them 37.5% ownership of the pipeline itself.

“The Enbridge/Marathon purchase was announced August 2, just before pipeline protests erupted around a river crossing north of the Standing Rock Reservation,” the News Tribune recalls. “Since, protesters have celebrated a major though possibly short-lived victory as the U.S. Army Corps of Engineers [last] month denied an easement necessary for the pipeline to cross a dammed section of the Missouri River called Lake Oahe.”

Referring to the end-of-year SEC filing, the paper adds that “none of the companies involved cite a reason to push back the termination date in SEC filings, though uncertainty over the project’s future could play a part.”

Although U.S. president-elect and former Energy Transfer Partners shareholder Donald Trump is expected to support the project, the project’s financial fragility has been receiving more attention in recent weeks. Before the holiday, the Institute for Energy Economics and Financial Analysis was out with a recap of the complex wheeling and dealing behind the pipeline.