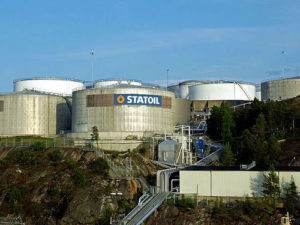 Statoil ASA is taking a $500- to $550-million impairment charge to walk away from its holdings in Canada’s tar sands/oil sands, after selling its assets to Athabasca Oil Corporation for $832 million in cash and shares, the Norwegian state oil company announced Wednesday.

Fossil booster Claudia Cattaneo’s coverage in the Financial Post headlined the story as “the starkest sign yet Canada’s oilsands resource has lost its lustre.” At the Calgary Herald, columnist Deborah Yedlin said Statoil had made the decision to cut costs “after posting a surprise US$432 million third-quarter loss”; the headline on her story said the company’s “exit from Alberta reinforces cost challenges of oilsands”.

Climate hawks, need it even be said, had a different take. “The environment and Statoil’s shareholders are both winners here, as any serious attempt to meet the Paris climate commitments will turn this kind of high-carbon oil into a stranded asset,” said Greenpeace Canada climate and energy campaigner Keith Stewart.

While the decision was “10 years overdue,” said Greenpeace Norway, “we celebrate and congratulate Statoil on a wise decision.” “Hooray!” wrote WWF Norway. “Statoil is selling.”

“The deal marks a big retreat from the oil sands, which in the last decade had been the target of a massive spending boom among European and Asian companies,” the Globe and Mail reports. “Since then, development and operating costs jumped and planned export pipelines for the oil faced years-long delays. Meanwhile, the shale oil revolution unlocked massive reserves in locations such as North Dakota and Texas, which can be developed more quickly and cheaply.”

The Globe points to French fossil giant Total SA as another one-time investor that is scaling back its commitments in the tar sands/oil sands, stepping back from its Joslyn project and reducing its exposure in the $13.5-billion Fort Hills development.

Statoil country president Paul Fulton said the company’s “portfolio has changed and also the energy markets have shifted quite fundamentally” since it entered the tar sands/oil sands in 2007. “We’ve seen a decline in the oil price, and Statoil has a broader portfolio of assets that it needs to allocate its capital to.”

Those new interests include a boost to its renewable energy business unit, a possible record-breaking geothermal project in Iceland, and a stake in Convergent + Power, an American energy storage company with offices in the U.S. and Canada. “It is understood the investment from Statoil Energy Ventures will drive the expansion of Convergent’s commercial and industrial segments, with U.S. companies that commonly pay time-of-use and peak demand charges relying on energy storage to bring down their energy bills by a significant proportion,” Energy Storage News reports.

Statoil will now become an investor in Athabasca, with just under 20% of its shares.