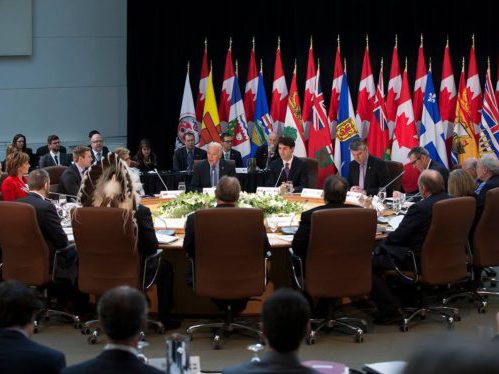 Clerk of the Privy Council

Carbon pricing, climate resilience, cleantech jobs, methane reduction in the fossil industry, and a suite of carbon-cutting measures in buildings, industry, transportation, and the electricity sectors are among the elements of a pan-Canadian climate framework adopted late Friday evening by Prime Minister Justin Trudeau and 11 out of 13 provincial and territorial premiers.

Despite objections from Brad Wall of Saskatchewan and Brian Palliser of Manitoba—who between them represent 7% of Canada’s population—and last-minute dealing by British Columbia Premier Christy Clark, “Trudeau was able to appear onstage in a crowded theatre and declare himself ‘very happy’ to have general agreement” on the pan-Canadian plan, CBC reports.

“Having already become the fourth prime minister to commit his country to reducing its greenhouse gas emissions, Trudeau has now gotten further than any in explaining how Canada might actually do that,” notes correspondent Aaron Wherry. “Twenty-eight years after the first commitment, there is something like a plan.”

The First Ministers’ communiqué stresses that “climate change is indisputable, as are the significant impacts it is having in Canada and around the world,” and “nowhere is this more pronounced than in Canada’s North.” It stresses “the many economic opportunities afforded by clean growth,” while grounding the pan-Canadian plan in a commitment to collaboration among jurisdictions, active leadership by Indigenous communities, and accountability to future generations.

Significantly, the published Pan-Canadian Framework commits to annual reports back to “enable governments to take stock of progress and give direction to sustain and enhance efforts.” The reference to a stocktake parallels provisions in the Paris Agreement for countries to review progress at regular intervals, with the expectation that they will adopt faster, deeper carbon cuts over time.

The framework is long on anecdote and short on data. But early indications are that the federal government will be able to meet its commitment to a 30% carbon reduction by 2030—a target that both Trudeau and Environment and Climate Minister Catherine McKenna have repeatedly declared a floor, not a ceiling for Canada’s climate ambition—by buying international carbon credits equal to 44 megatonnes of emissions per year. That would bring the country’s total emissions down to the 2030 target of 524 Mt—after factoring in anticipated new greenhouse gas output from the two liquefied natural gas projects and two diluted bitumen pipelines that recently received federal approval.

That’s a vast improvement over the 870 Mt Canada would have emitted in 2030 without climate action, the government’s 742-Mt calculation from late last year, or the 653 Mt projected in the pan-Canadian plan after accounting for recent federal and provincial carbon reduction announcements. But Ottawa and the provinces and territories are still shying away from meaningful reductions in the fossil sector—meaning that the next steps are pretty clear if governments want to amp up their climate ambition and align the country with the Paris Agreement goal of limiting average global warming to 1.5°C by the second half of the century.

But despite the hard work that is undoubtedly ahead, Friday was mostly a day to celebrate a deal that was more than a year in the making—with antecedents that for many participants and observers went back decades.

“Today establishes a new normal for Canada on the issue of climate change,” said Catherine Abreu, executive director of Climate Action Network-Canada, in a statement picked up by the New York Times. “For the first time, we have a framework that brings the federal government, most provincial and territorial governments, and major sectors of our economy together on a shared path.”

“This is a big deal,” added Dale Marshall, national program manager with Toronto-based Environmental Defence. “Canada finally has a climate change framework that has broad buy-in from provinces. Whether it’s coal-fired power, homes and buildings, or personal vehicles, the plan puts Canada on the path to phasing out fossil fuels over time and replacing them with clean, renewable energy.”

But Andrew Gage, staff counsel at West Coast Environmental Law, called for “a truly science-based approach that plots a path to the future.” He warned that the framework “does not yet clearly show how each province and industry will do its fair share in moving towards a sustainable, climate-friendly economy. In particular, it fails to reconcile new pipelines and expanding oil sands development with Canada’s ability to meet its already inadequate climate commitments.”

“If it wasn’t for Trudeau’s recent pipeline approvals, this climate plan would be a historic success,” agreed Manitoba Energy Justice Coalition campaigner Mathew Patterson. “While we acknowledge the accomplishments and hard work to develop this policy framework by the federal government and the provinces, we are concerned that without a managed decline of fossil fuel extraction we will fail to meet our obligations to the Paris Treaty. When you put the recent pipeline approvals beside the climate plan, it is clearly about allowing oil companies to profit for as long as possible.”

Kim Perrotta, executive director of the Canadian Association of Physicians for the Environment, decried “provincial nay-sayers who do not seem to understand that climate change is a public health emergency happening in slow motion,” claiming 150,000 lives since 2000, most of them children. “We applaud the carbon taxes, the promise to phase out coal plants, the commitments to renewable energy, energy efficiency, and public transit,” she said. “But we want to see numbers that demonstrate how we will meet our global commitments.”