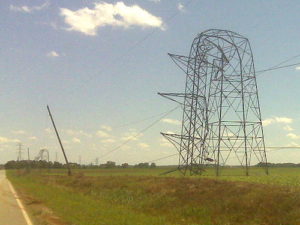 Aging natural gas and diesel generators may have been the cause of a state-wide blackout in South Australia last September that was initially blamed on wind turbines, according to a modelling study by Lloyds Register and international renewable energy and storage firm RES.

The blackout “could have been avoided if the gas generators had been replaced by inverter-linked renewables and storage,” RenewEconomy reports.

“That’s because new smart and fast-reacting technology can respond much quicker to unexpected events than the ageing portfolio of gas and diesel generators. The inverters and storage that go with such systems could have smoothed out the changes in output and voltage, and not made them worse as the gas-fired generators did.”

The state’s power system went dark when huge storms, packing winds of up to 260 kilometres per hour, brought down three major transmission lines and threw the grid into disarray. “The fall in output from six wind farms, because they were not programmed to ride through multiple voltage changes, was blamed in some quarters,” RenewEconomy notes. “However, most energy experts say the blackout was inevitable no matter what generation was operating in the state.”

RenewEconomy Editor Giles Parkinson notes the blackout “has been used by the Coalition government, the fossil fuel lobby, and critics of renewable energy as proof that such technologies are not reliable and endanger the grid.” But the modelling study “suggests the problem may have been in the way that the gas generators responded to the changes in the network. The sudden changes in output from the gas-fired generators may have made the situation worse, as they did in a previous outage in November 2015.”