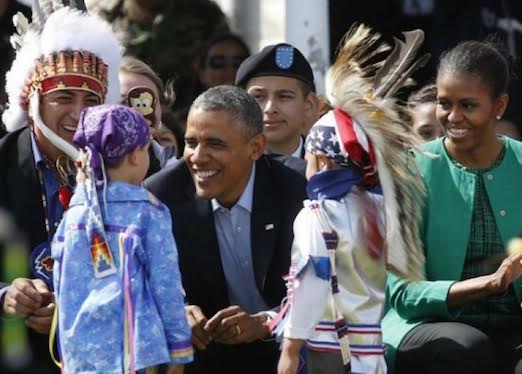 The Standing Rock Sioux and their supporters declared victory late Sunday as the U.S. Army Corps of Engineers declined a final easement that would have allowed Energy Transfer Partners to complete construction of its massively controversial Dakota Access Pipeline.

Drummers led a procession through the Oceti Sakowin protest camp after the decision was announced, while Bold Nebraska called for an online thank-you note to the area’s Water Protectors and urged President Barack Obama to permanently block the development by declaring a Standing Rock National Monument.

“The Standing Rock Sioux Tribe and all of Indian Country will be forever grateful to the Obama administration for this historic decision,” tribal chair Dave Archambault said in a statement.

But although the passage under Lake Oahe on the Missouri River is safe for now, the battle isn’t over yet.

“Even though the Obama administration put a temporary hold on construction on one section, the company building the Dakota Access pipeline will be aggressively moving to finish construction before Donald Trump is president,” Bold Nebraska states. “With just a few months left in President Obama’s term, we have very little time to organize and convince the president to declare a ‘Standing Rock’ national monument.”

Member of Congress Kevin Cramer (R-ND) said the announcement sent “a very chilling signal”, adding that “law and order” will be restored when President-elect Donald Trump takes office next month. Cramer said he felt badly for the Army Corps doing “diligent work…only to have their Commander-in-Chief throw them under the bus.”

Tribal attorney Jan Hasselman acknowledged yesterday’s Army Corps decision could be appealed. Energy Transfer Partners “can sue, and Trump can try to overturn,” he said. “But overturning it would be subject to close scrutiny by a reviewing court, and we will be watching the new administration closely.”

Archambault added that “we hope that [ETP CEO] Kelcey Warren, [North Dakota] Governor [Jack] Dalrymple, and the incoming Trump administration respect this decision and understand the complex process that led us to this point.”

Although the pipeline is largely complete, and “today’s decision does not kill the project outright,” E&E News [subs only] wrote last night, “the analysis is expected to take months, and the company has indicated that contracts will fall through if the pipeline does not go into service on schedule.” Pipeline supporters called the decision “purely political” and urged Trump to reverse it after he takes office.

“With President-elect Trump set to take office in 47 days, we are hopeful that this is not the final word on the Dakota Access pipeline,” said Midwest Alliance for Infrastructure Now spokesperson Craig Stevens. (Trump’s understanding of the project may be shaped by his status as an investor in two of the companies behind the pipeline.)

In its statement, the Army Corps said more review was needed before it could reach a final decision on the easement. The Standing Rock Sioux, along with thousands of supporters gathered at the Oceti Sakowin camp, said the line would damage sacred cultural sites, and pointed out that a pipeline spill would imperil their water supply—the same concern that led officials to precipitate the Standing Rock crisis by rerouting Dakota Access from waters serving non-Tribal communities.

“Although we have had continuing discussion and exchanges of new information with the Standing Rock Sioux and Dakota Access, it’s clear that there’s more work to do,” said Assistant Secretary for Civil Works Jo-Ellen Darcy. “The best way to complete that work responsibly and expeditiously is to explore alternate routes for the pipeline crossing.” Energy Transfer Partners had previously refused to consider an alternate route.

Interior Secretary Sally Jewell said the Army Corps’ “thoughtful approach…ensures that there will be an in-depth evaluation of alternative routes for the pipeline and a closer look at potential impacts.” That additional due diligence “underscores that tribal rights reserved in treaties and federal law, as well as Nation-to-Nation consultation with tribal leaders, are essential components of the analysis to be undertaken in the environmental impact statement.”