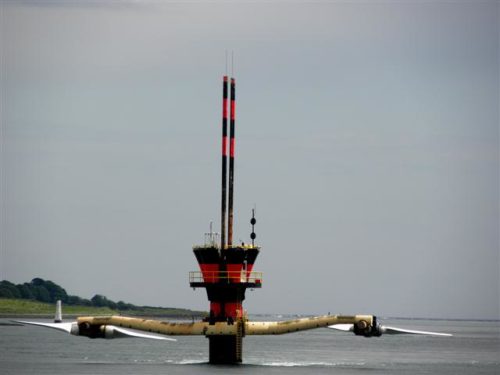 While the 1,000-tonne, five-storey turbine began generating power for the equivalent of 500 homes almost immediately, its output comes at a high cost, for now—C$530 per megawatt-hour, compared to an average power price of $60.

“The deployment is part of a large-scale demonstration project to test the technology in the powerful tides of the Bay of Fundy over the next several years,” CBC reports. “Executives with OpenHydro and Nova Scotia Power’s parent company, Emera, said refinements in technology and standardization will eventually bring the cost down.”

Despite the high cost, Nova Scotia Energy Minister Michel Samson was upbeat about the demonstration. “We are ushering in a new era and taking an unprecedented step toward a lower-carbon future,” he said.

OpenHydro and Emera have formed a joint venture, Cape Sharp Tidal, to install this and one other demonstration turbine. A previous effort failed within days in 2009, when turbine blades were destroyed by the powerful Bay of Fundy tides. The new, improved turbine has already survived the biggest tide Minas Passage has seen in 17 years, said OpenHydro spokesperson Thierry Kalanquin.

Protesters were on hand to oppose the deployment, and some Bay of Fundy fishers have launched court action, charging that the turbine will threaten the local lobster fishery. The two project proponents say they’ve been monitoring the installation, and have detected no impact on fish or marine mammals.

“We have demonstrated that we have absolutely no environmental impact. Zero,” Kalanquin said. “There are no fish going through the turbine right now.”

The Cape Sharp consortium hopes to install more turbines if the demonstration succeeds, and four other consortia have also been approved to generate power in the Passage, all under management by the non-profit Fundy Ocean Research Centre for Energy. But at this week’s launch, Emera Chief Corporate Development Officer Nancy Tower said any future expansion would depend on the results—and impact—of the initial demo.

“Would we like to put more turbines in the Bay of Fundy? Yes, we would, but not at the expense of things that matter to coastal communities or to the livelihoods that depend on it,” she said. “We’ve made a commitment to safeguarding the bay, and we’re working with scientists and universities to protect the ocean and marine life.”