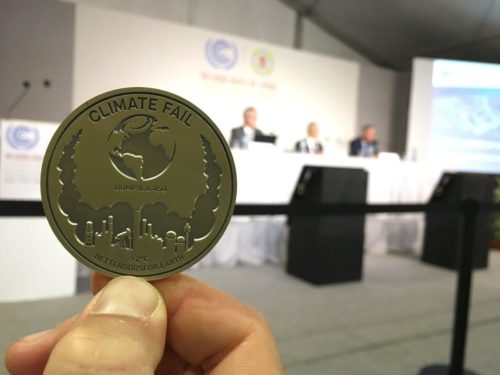 While most countries are on track to fulfill their national pledges under the Paris Agreement, that activity won’t be nearly enough to achieve the agreement’s goals, the International Energy Agency reported this week in its 2016 World Energy Outlook.

The IEA noted several items of good news for the climate, among them that “growth in energy-related CO2 emissions stalled completely in 2015.” That accomplishment was “mainly due to a 1.8% improvement in the energy intensity of the global economy, a trend bolstered by gains in energy efficiency, and by expanded use of cleaner energy sources worldwide, mostly renewables.” The world also spent US$175 billion less on fossil fuel consumption subsidies.

“Countries are generally on track to achieve, and even exceed in some instances, many of the targets set in their Paris Agreement pledges,” the agency says. “This is sufficient to slow the projected rise in global energy-related CO2 emissions,” it adds, “but not nearly enough to limit warming to less than 2°C.”

Analysts and critics came at the IEA report from a variety of angles.

The Institute for Energy Economics and Financial Affairs (IEEFA) noted the IEA’s concession that China hit “peak coal” three years ago. The IEA “now take as an absolute given that China’s consumption of coal actually peaked three years ago and is now in structural decline,” said IEEFA Director Tim Buckley. “It was only a year ago that the IEA concluded that China’s consumption of coal was unlikely to peak any time prior to 2020.”

In a separate analysis, Buckley writes that the agency is “still behind the curve”, though “not as far behind as it was,” even as it acknowledges the increased stranded asset risk facing fossil investors. “A history of IEA underestimation of technology change has been partially remedied in this new report, but the agency’s solar and wind forecasts can at best be described still as very conservative.”

Oil Change International to distributed medallions at the United Nations climate conference in Marrakech that showed the success of a 1.5°C future on one face and the devastation of missing the target on the other—to make the case that climate policy has to be better than a coin flip.

“The International Energy Agency has failed to reflect the Paris Agreement in its new World Energy Outlook. It continues to present its obsolete 450 Scenario as the default climate scenario, which gives only a coin-toss chance of staying below 2°C,” said Senior Advisor Greg Muttitt. “The world needs better odds of avoiding dangerous climate change.” So “to regain relevance to energy decisions, the IEA must model the Paris goal of 1.5°C and drop its outdated 450 Scenario.”

Greenpeace International said the IEA “refuses to take full account of the breakthrough of renewable energy” that is sweeping the world. “The IEA now admits it has long underestimated renewable energy, but astonishingly little has changed about its projections,” said Harri Lammi, Senior Coal Campaigner with Greenpeace East Asia. “The agency claims the amount of wind power installed each year will fall and solar installations will almost stop growing after 2020, which is absurd. Given that solar in India, for instance, has already become cheaper than coal, renewable growth will continue to disrupt the fossil fuel industry much more profoundly than the IEA suggests.”

The IEA’s future-looking scenario projects world energy demand 30% greater in 2040 than today, with supply still heavily dominated by fossil fuels. “A cumulative US$44 trillion in investment is needed in global energy supply” over that time, the agency reports, “60% of which goes to oil, gas, and coal extraction and supply, including power plants using these fuels.” The IEA assumes than 20% will go to renewable energies.

“Growth in oil demand slows,” the agency’s model suggests, but still exceeds 103 million barrels per day by the end of the study period. (Other forecasts differ.) “Natural gas fares best among the fossil fuels, with consumption rising by 50%,” the agency says. “Coal use is hit hard by environmental concerns and, after the rapid expansion of recent years, growth essentially grinds to a halt.” But in the IEA’s imagined future, the world still gets 40% of its energy from fossil fuels in 2040.

And for all that investment, the international assessment adds, “hundreds of millions of people are still left in 2040 without basic energy services.”

And their futures would get worse if the agency’s view of the future came to pass. Even offset by national carbon reduction commitments, the IEA projects that continued use of fossil fuels will still release 150 gigatons of carbon dioxide or equivalent emissions per year by 2040, The Guardian reports—less than one-quarter of today’s output, but still enough to push the planet’s temperature up by 2.7ºC from pre-industrial levels by the turn of the next century. That degree of change will likely prove catastrophic to ecosystems as well as societies.

Only “a step-change in the pace of decarbonization and efficiency improvement” can now bring emission trends into line with the global target of the Paris Agreement—to limit warming to below 2.0ºC, let alone the aspirational goal of keeping that figure much closer to 1.5ºC.