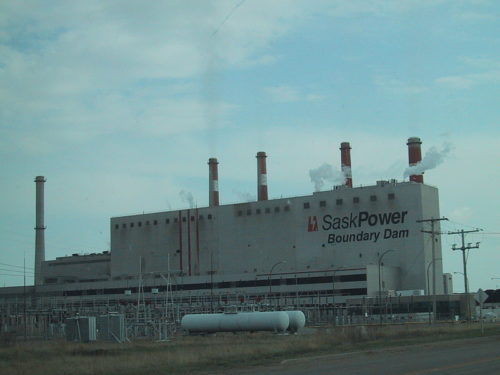 Saskatchewan’s Boundary Dam carbon capture and storage (CCS) project is neither the cleanest of its kind, as its boosters claim, nor is it inexpensive, the Pembina Institute argues in an analysis published last week.

Saskatchewan Premier Brad Wall—and certain lawyers key to U.S. President Barack Obama’s Clean Power Plan—argue that the carbon-capturing, coal-burning facility is an order of magnitude cleaner than any other CCS effort on the planet. But Pembina says the revenue-boosting purpose to which the captured CO2 is put defeats the plant’s potential as a carbon reduction mechanism.

“Up to 90% of the carbon dioxide produced by burning coal at Unit 3 of the Boundary Dam plant can be caught by a filter, keeping it out of the atmosphere,” the National Post reports. The catch is that “the captured CO2 is liquefied and piped to an oil company that shoots it into the ground, thinning the oil, and allowing more to be pumped up.”

Pembina’s Duncan Kenyon describes that as a carbon dioxide shell game that does nothing to reduce real-world greenhouse gas emissions.

Meanwhile, “outside analysis suggests the two-year-old project is both an environmental and an economic failure” from which SaskPower “won’t recover its $1.5 billion investment,” the Post reports. Far from it: The Crown utility expects to lose nearly two-thirds of a billion dollars running the plant over the next three decades.

The losses matter beyond the province. Carbon capture based on the Boundary Dam model is widely touted by fossil fuel defenders as a way of having our carbon cake and eating it, too (Editor: Mental note…Got to have a word with Chris about his pastry metaphors)—extending the era of combustion energy while dodging the climate price of combustion waste products.

Meanwhile, another group has tested the idea that carbon capture and storage could be scaled up to reduce atmospheric CO2 levels back to a concentration at which the climate might stabilize—and found the cost staggeringly prohibitive.

“About 1,172 gigatonnes of CO2 would have to be removed from the atmosphere to bring it back to pre-industrial levels and stop global warming,” Cleantechnica estimates. Based on figures provided by proponents of the technology, it notes, “each tonne of CO2 will cost $120-US$140 to capture, ship, and sequester.”

Which means that “capturing and sequestering the 1,172 gigatonnes would cost about US$140 to $164 trillion. The global GDP in 2015 was about US$76 trillion, so capturing all of the excess CO2 in the air would cost about two years of the total creation of wealth for the entire world, with nothing spent on anything else.”