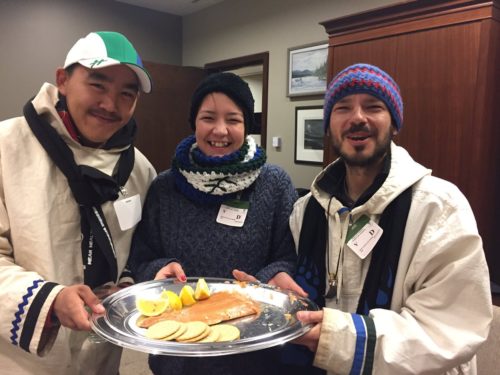 Nunatsiavut President Johannes Lampe encouraged protesters occupying the site of a controversial hydroelectric project to end their hunger strike and go home earlier this week, after an 11-hour meeting with Newfoundland and Labrador Premier Dwight Ball produced progress in negotiating a controversial plan to flood the Muskrat Falls reservoir.

“If you are still at the site, within or [outside], or if you are still doing the hunger strike, go home,” Lampe said. “I feel like the progress that had been made today will give the Labrador Inuit the opportunity to go back home to their family.”

“WE WON!!!!!! (Details to come tomorrow) #MuskratMadeRight,” tweeted Labradorian freelancer Ossie Michelin. “One of the happiest moments of my life was seeing my friends eat that char after the hunger strike.” (A photo of the smoked char served to the hunger strikers was time-stamped 1:37 AM.)

“The decisions that will be made, going forward, will not be at the whim of government,” added NunatuKavut Community Council President Todd Russell. “We have a commitment that if the science says the soils must be removed…the soil will be removed. That is significant.”

Downstream communities had expressed serious concerns about methylmercury contamination that will result if the flooding goes ahead as planned. Then Ball sat down with representatives of the Innu Nation, the Nunatsiavut government, and the NunatuKavut community council and agreed to postpone the flooding pending further study of the plan.

“An agreement announced in the early hours of Wednesday will see further independent assessment of the multi-billion-dollar hydroelectric project, and a special committee that will look at ways to reduce possible methylmercury contamination,” CBC reports. “The provincial government also opened the door to potential further clearing of the Muskrat Falls reservoir” before it is flooded.

“Today’s meeting was about one thing: the health of Labradorians,” Ball said as the meeting wrapped up around 2:00 AM Wednesday. He said the province and the communities reached “common ground on a lot of concerns, a lot of different issues today.”

Stan Marshall, CEO of provincially-owned Nalcor Energy, welcomed the agreement, adding that the company is “committed to completing the Muskrat Falls project in a manner consistent with best practices for the safety of our workers and the public, and for the protection of the environment.” But the national association representing large hydro developers was less sanguine about the result.

“If we only give a veto to the immediate community that’s closest to the resource, and we ignore the wider community that will benefit from the resource, we’re going to have a heck of a dysfunction and we’re not going to build anything,” said ex-federal cabinet minister Sergio Marchi, now CEO of the Canadian Electricity Association.

The Globe and Mail editorialized in favour of the protests and resulting negotiations Thursday morning.

“Governments, most people would agree, shouldn’t poison their citizens,” the paper noted. “And yet somehow, in their deference to an over-budget, woefully behind-schedule hydroelectric megaproject on the Churchill River, the leaders of Newfoundland and Labrador were prepared to do just that.”

The editorial traced the history of the project and the irreversible (and heartbreaking) neurological impacts of methylmercury poisoning, concluding that “it would be funny if it weren’t so pathetic. Grandiose megaprojects like Muskrat Falls have a way of making politicians lose touch with reality, to the point where an unacceptable level of poisoning can be justified when only a small number of people in remote communities might be affected. The protests at the Muskrat Falls site have been a necessary corrective to this myopic understanding of government and its role in securing the lives of all citizens.”