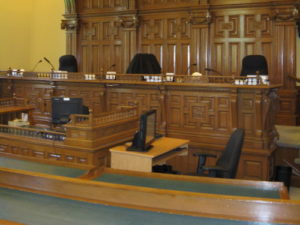 Environmental groups are arguing that two of three members of the National Energy Board panel reviewing TransCanada Corporation’s proposed $16-billion Energy East diluted bitumen pipeline should recuse themselves from the hearings.

The challenges centre on allegations the pair improperly held private meetings with former Quebec premier Jean Charest, now a lobbyist for the project.

The latest headache for the deeply troubled National Energy Board arises from communications and private meetings that Board members Jacques Gauthier and Lyne Mercier held with Charest in late 2014 and early 2015. Both sit on the panel named in March, 2014 to review the TransCanada proposal, the National Observer reports.

“The NEB has powers of a federal court and its members, like judges, must avoid taking actions that would show bias, such as meeting privately with one of the parties involved in a matter under review,” Mike De Souza writes in the Observer.

“Under Canadian law,” De Souza adds, “there is no need for definitive proof of bias to remove a judge or panelist in a federal review. A previous case, also involving the NEB from the 1970s, set a precedent when the Supreme Court ruled that the appearance of bias was enough to justify the removal of panel members who had a relationship with an industry proponent.”

The project at the heart of that case—the Mackenzie Valley pipeline—was never built.

There are now two submissions seeking Mercier’s and Gauthier’s dismissal from the panel: the latest filed by Vancouver-based Ecojustice, another by Quebec’s Stratégies Énergétiques and Association québécoise de lutte contre la pollution atmosphérique. The latter also asks for the dismissal of the Board’s chief executive Peter Watson. As well, the Observer reports, “36 different environmental groups have called on the government to suspend the Energy East hearings, pending a public inquiry into the private meetings.”

Neither the NEB nor TransCanada responded to the Observer’s request for comments. Strikingly, neither Canada’s public broadcaster nor its two national newspapers, The Globe and Mail and the National Post, had as of Tuesday afternoon reported the allegations of bias or court submissions.

The panel’s hearings on the project are scheduled to resume next week in Quebec.