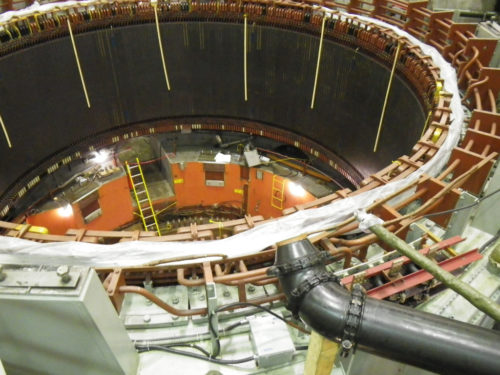 With low crude prices taking the air out of Newfoundland and Labrador’s offshore oil industry, an out-of-province court and a cross-country MP have put headwinds in the way of its hopes for more revenue from hydroelectricity exports.

First, the Quebec Court of Appeal upheld the strict terms of a contract negotiated nearly half a century ago by the province’s first post-Confederation premier for the sale of power from the 5.4-GW Churchill Falls generating station in Labrador. Then Green Party leader and B.C. MP Elizabeth May called on the Liberal government to rescind loan guarantees its Conservative predecessor issued in 2012 to the province’s Crown utility, Nalcor Energy, to build the troubled 824-MW hydro project at Muskrat Falls.

The contract Premier Joey Smallwood signed in 1969 has been a source of regret for most of his successors since. Newfoundland has long cried foul over its contract with Hydro-Québec, under which the latter buys Churchill Falls electricity at the provincial border at a contract-limited price and sells it to utilities in the northeastern U.S. at a significant profit. Nalcor estimates the province has received $1 billion from the agreement during its lifetime, while Hydro-Québec has pocketed $22 billion.

But Quebec’s Court of Appeal “upheld a 2014 lower court ruling,” Canadian Business reports, “agreeing that the provincially-owned power utility is under no obligation to revisit the deal as Newfoundland and Labrador has wanted.” The contract’s original negotiators, the Court observed, anticipated that the market price of electricity would vary during its lifetime, but had nonetheless accepted its terms.

Newfoundland previously fought all the way to the Supreme Court of Canada, seeking relief from the contract on other legal grounds, without success. Nalcor, Canadian Business reports, declined to issue a statement about the latest defeat until it had studied the Court’s judgement further.

Rubbing salt in the latest judicial wound for Newfoundland and Labrador: The contract Joey Smallwood agreed to in 1969 will renew automatically on September 1 for another 25 years. So the rejected appeal means the contract’s established terms will now likely continue in force until 2041.

Meanwhile, May called on the federal government to spend “billions of dollars to get out of a bad project” at Muskrat Falls. The MP for Saanich-Gulf Islands, BC urged Ottawa to reject Newfoundland and Labrador’s request for additional loan guarantees to cover a 54% increase in the cost of the project—now due to reach full power two years behind schedule in 2020—to $11.4 billion.

Last month, Nalcor CEO Stan Marshall admitted to CBC News that “Muskrat Falls was not the right choice for the province.” But he rejected abandoning the half-built dam and generating complex. “If we halted this project, we would have spent $6.7 billion, and would have to spend billions more to settle claims and bring the project to some conclusion. And we would not have a source of power.”

Nalcor has also signed a contract to supply free electricity for 35 years to the builder of a subsea interconnection beneath the Strait of Belle Isle to deliver Labrador hydro to the island of Newfoundland. The link is on schedule to be available at the end of 2017.

But May is unconvinced. “Finishing it doesn’t get you ahead in the end, it just gets you deeper in debt,” she said. “Let’s not throw good money after bad.”