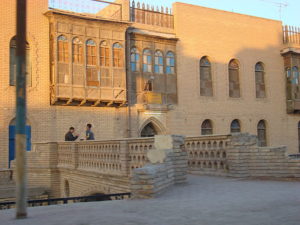 “Incredible” temperatures measured at 54°C/129.2°F last Thursday in Mitribah, Kuwait, and 53.9°C/129°F in Basra, Iraq Friday were the hottest ever recorded in the Eastern Hemisphere if they are confirmed, Weather Underground meteorologist Jeff Masters and weather historian Christopher Burt reported last week.

The two readings are likely the highest ever outside Death Valley, California, and Mitribah’s could match the highest temperature ever reliably recorded anywhere.

“Death Valley currently holds the record for the world’s hottest temperature of 134.1 degrees (56.7 Celsius), set July 10, 1913,” the Washington Post reports, but Burt questions the credibility of that report. That all-time record “has been scrutinized perhaps more than any other in the United States,” he wrote. “I don’t have much more to add to the debate aside from my belief it is most likely not a valid reading when one looks at all the evidence.”

“While the Middle East’s highest temperatures have occurred in arid, land-locked locations, locations along the much more sultry Persian Gulf and Gulf of Oman have faced the most oppressive combination of heat and humidity,” the Post reports. Fujairah, on the east coast of the United Arab Emirates, recorded a heat index above 60°C/140°F on Thursday—a combination of heat and humidity so extreme that it stretched the capability of a measurement tool designed only to compute values up to about 136°F.

In bone-dry Basra, by contrast, the heat index of 46°C/115°F actually made it feel a bit cooler than the ambient temperature.

“The torrid conditions observed in the Middle East over the last two summers may be a harbinger of even more extreme heat in the future,” writes the Post’s Jason Samenow. “A study published in the journal Nature Climate Change in October cautioned that by the end of the century, due to climate change, temperatures may become too hot for human survival,” with a heat index of 74º to 77ºC (165º to 170ºF). (h/t to The Energy Mix subscriber Diane Beckett for first pointing us to this story)