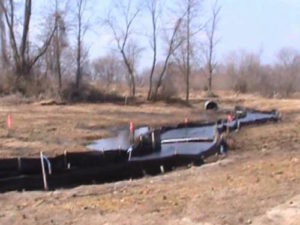 The communities of Prince Albert and North Battleford, Saskatchewan are restricting water use, with Prince Albert expecting emergency measures to stay in effect until fall, after a Husky Oil pipeline spilled 250,000 litres (1,572 barrels) of heavy oil and diluent into the North Saskatchewan River last Thursday.

While the company and the province recovered about 40% of the oil, the rest is floating downstream from the spill site at Maidstone, SK. It has already passed the village of Maymont, more than 100 kilometres from Maidstone, according to the Globe and Mail. “Five booms were set up along the North Saskatchewan River to contain the spill, but these have been breached,” the Prince Albert Daily Herald reported Sunday.

Environment and Climate Change Canada is investigating whether the spill contravened federal environmental or wildlife legislation, the department told the National Observer.

“Throughout this time, the City of Prince Albert will find ways to continue providing City users with safe, potable drinkable water,” wrote Herald reporter Tyler Clarke. But city managers “urged residents to limit their use of water as much as possible to lessen the strain on the City’s newly stressed water sources.”

Once its regular water intake is shut down, Prince Albert will build a temporary, 30-kilometre pipeline to collect water from the South Saskatchewan River. That temporary situation “won’t work in winter in Saskatchewan, I can guarantee you that,” provincial water official Sam Ferris told the Globe.

Meanwhile, the city is warning residents not to swim in or drink from the North Saskatchewan, has cut off water service to rural users, and is shutting down irrigation, car washes, and water parks. North Battleford, population 14,000, will rely on well water, and is restricting all uses except drinking, food preparation, and bathing, CBC reports. “Hospitals in both communities were scrambling to fill their water storage tanks while they could.

“Any non-essential use of water must cease and desist immediately,” Prince Albert said in a published statement. “Residents are encouraged to minimize flushing of water and shower usage. Residents are asked to not water their lawns or wash their vehicles until further notice.”

At Land A Paw Animal Rescue in Maidstone, wildlife rehabilitation workers from Saskatoon set up a triage station for wild birds affected by the spill. So far, one sparrow has died, while a Canada goose and a blue heron have been oiled.

“They are completely still covered. We have to get fluids in them and food and stabilize them before we can begin the washing process,” Jan Shadick of Living Sky Wildlife Rehabilitation told CBC.

It was “overwhelmingly sad to see these birds drenched in this black oil and know that I have to wait to wash them and do something about it. And to just see the struggle, I guess, in their eyes,” she said, adding that the spill could have affected “hundreds and hundreds” of birds.