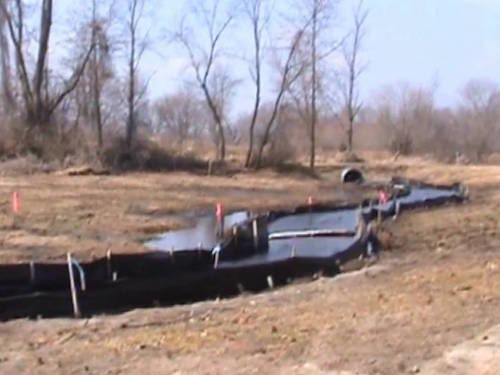 Calgary-based Enbridge Inc. is getting away with a “slap on the wrist” by paying fines and remediation of US$177 million for two pipeline spills in Michigan and Illinois in 2010, according to Anthony Swift, Canada director for the Natural Resources Defense Council.

The deal protects the company from any further penalties in connection with the two diluted bitumen spills.

In July 2010, a two-metre rupture in the company’s Line 6B across Michigan spilled 3.19 million litres of diluted tar sands/oil sands bitumen into a tributary of the Kalamazoo River. The United States government later found that “Enbridge failed to recognize a pipeline had ruptured until at least 17 hours” after the initial automated alarms went off. “In the meantime, Enbridge restarted Line 6B… pumping additional oil into the ruptured pipeline causing additional discharges of oil into the environment.” The U.S. National Transportation Safety Board concluded in a separate judgement that the company had displayed a “culture of deviance” from regulatory compliance norms.

The same company has been embroiled for several months in an ongoing controversy over questionable communications with Canadian regulators over its safety practices.

Under the U.S. settlement Enbridge, which reported a net income of C$629 million in 2013, will pay US$62 million in civil penalties for the Kalamazoo River spill and a second incident two months later that released more than 1 million litres of dilbit into tributaries of Illinois’ Des Plaines River. The combined penalty is the second-largest on record for a violation of the U.S. Clean Water Act, after BP’s fine for the Deepwater Horizon blowout in the Gulf of Mexico.

Nonetheless, “the fines will do little to force the pipeline industry to think about spills—even historically massive ones—as a cost of doing business,” Swift charged.

In addition to the fines, the company will spend another $110 million on precautionary upgrades against future leaks, including replacing the entirety of the 459-kilometre Line 6B pipeline. Enbridge will also pay the U.S. government $5 million to partially cover its expenses for the Kalamazoo River clean-up.

Enbridge has previously estimated its own clean-up costs after Kalamazoo at about US$1.2 billion, the National Observer reported, “including more than $551 million on response personnel and equipment and $227 million on environmental consultants.”

“The learnings from our experience have made us a better company,” Enbridge CEO Al Monaco said in a statement responding to the settlement. “The way we think about safety has changed,” he insisted. “Over the past six years, we’ve intensified our focus on the safety and integrity of our systems enterprise-wide, and we’ve invested significantly in our people, processes, equipment, and technology.”