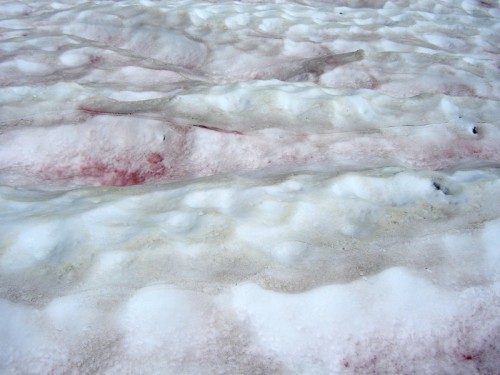 Individually almost invisible, minute algae that bloom each summer across expanses of the Arctic turn snow and melting ice a flamingo shade of pink. They may also be massively increasing the amount of solar energy that snow and ice absorb—and how fast they melt.

The joint British-German research team that reported the findings in the journal Nature concluded that the darkening effect of summer algae growth in such so-called “pink snow” can lower its albedo—the portion of light it reflects—by as much as 20%, with a corresponding increase in the heat energy the snow absorbs.

Based on the “ubiquitous” nature of “cosmopolitan” pink algae sampled at 40 snowfield and glacier locations from Greenland to Sweden, the researchers estimated “the overall decrease in snow albedo by red-pigmented snow algal blooms, over the course of one melt season” across the region, at 13%. “This will invariably result in higher melt rates,” the scientists concluded. “We argue that such a ‘bio-albedo’ effect has to be considered in climate models.”

Greenland “is currently losing about 200 billion tons of ice per year,” InsideClimate News reports, “and the rate has doubled since the 1900s.” This spring, scientists recorded melting of the island’s ice sheets weeks earlier than in the past. Other factors believed to be contributing to the decline are changes in the course of the northern jet stream, the albedo decline associated with sea ice loss and deposited black carbon from industrial Asia, and the effects of cloud cover.

Among those influences, some question the significance of pink algae. “With the caveat that this isn’t my area,” climatologist Gavin Schmidt, director of the NASA Goddard Institute for Space Studies, told InsideClimate, “this is very unlikely to be that relevant at the global scale. The results are specific to areas that are already melting and have these algae. That is a very small fraction of the snow cover. I’m all for improving climate models, but this is very niche.”