Murray Lays Off Up to 80% of Work Force, Tells Miners to Vote for Trump 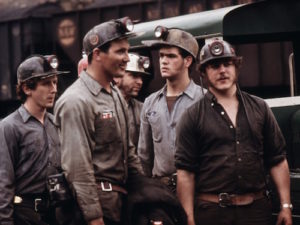 Murray Energy Corporation President Robert Murray announced plans late last week to lay off up to 4,400 workers, or 80% of his company’s remaining work force, before pivoting to a plea to those employees to vote for Republican presidential nominee and reality TV star Donald Trump.

“Frankly, I am frightened for you, my employees, and the survival of your jobs and family livelihoods,” Murray said, in a speech first reported by the Wall Street Journal. He blamed the failure of the St. Clairsville, OH-based company on “the ongoing destruction of the United States coal industry by President Barack Obama and his supporters, and the increased utilization of natural gas to generate electricity.”

But Huffington Post points to a small disconnect in Murray’s pitch: the U.S. election takes place in November, but Murray Energy, the largest privately-held coal company in the United States, will be issuing layoff notices in September.

“The coal industry has been in decline for decades. In 2007, coal still produced 50% of the electricity used in the U.S. Nine years later, that number stands at 33%,” HuffPost notes. And “the very idea that wealthy coal executives represent miners’ best interests ignores a long history of violence and abuse against workers who risked their lives to extract a fuel that helped usher in unprecedented economic growth, often for meagre wages.”

That point was underscored over the weekend, with news that U.S. Senate Majority Leader Mitch McConnell (R-KY) is holding up legislation that would guarantee health and pension benefits for more than 100,000 former coal workers—at no cost to taxpayers—by transferring available funds to a decades-old plan managed by the United Mine Workers Union of America.

“The plan has too few assets, too few employers, and too few union workers now paying in,” Sen. Sherrod Brown (D-OH) said in a Senate speech last month. “If Congress fails to act, thousands of retired miners would lose their health care this year and the entire plan could fail as early as next year.”

The Washington Post confirmed earlier this year that McConnell had blocked an effort to transfer the funds last December.