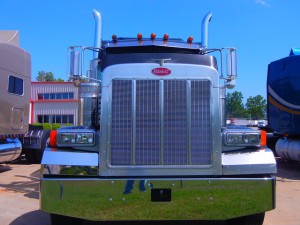 If electric cars are gaining fast on their internal-combustion competitors, how soon can we expect to meet the electric 18-wheeler on the open road? Not soon, suggests one self-identified “energy skeptic.”

Heavy duty trucks, Alice Friedman writes on Resilience.org, are what drive modern society—from intercity freight, to those house-sized behemoths that move tar sands/oil sands bitumen from mine to upgrader. If the transportation sector is to reduce its carbon footprint, those heavy trucks will need to shake their overwhelming reliance on diesel oil. A few automakers, like BMW, have introduced specialized short-range electric trucks. But inherent challenges stand in the way of electrifying truck transport on the intercity throughway.

The most fundamental issue is scale, Friedman notes: trucks are big and heavy. Fully loaded, they can weigh 40 times as much as a car. “Given the state of battery technology,” she observes, “scaling batteries up for heavy-duty trucks is impossible. A truck capable of going 621 miles hauling 59,525 pounds, the maximum allowable cargo weight, would need a battery weighing 55,116 pounds, and could only carry about 4,400 pounds of cargo. And because a heavy-duty truck battery is so large, charging takes too long—typically 12 hours or more.”

Electric trucks also experience performance shortcomings, “such as poor performance in cold weather, acceleration, driving up steep hills, too short a range, and declining miles per day as the battery degrades,” she adds, “all of which make planning routes difficult and inefficient.”