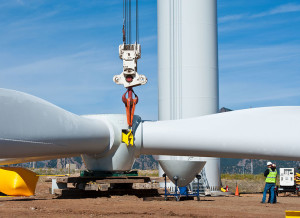 Clean energy spending in Canada dropped from nearly C$12 billion last year to $10 billion in 2014, “even though 2015 was a groundbreaking year politically for Canada’s clean energy sector,” Clean Energy Canada reports in the latest edition of its annual review, Tracking the Clean Energy Revolution: Canada.

“From Ottawa to Edmonton to Saskatoon, governments are saying all the right things about climate leadership and the clean energy transition,” writes CEC Executive Director Merran Smith in the foreword to the report. “That newfound resolve has opened the door to the prospect of significant growth in the years ahead.”

So far, notwithstanding Natural Resources Minister Jim Carr’s observation that “we are at a crossroads between reliance on fossil fuels of the past and the renewable energy future ahead,” CEC reports provincial or regional clean energy investment falling 89% in Alberta, 52% in British Columbia, 15% in Ontario, and 9% in Quebec, even as it grew 58% in Atlantic Canada, 121% in Manitoba, and from zero to $60 million in Saskatchewan. Looking to the horizon, Smith sees great growth potential, particularly in Alberta and Saskatchewan.

But “to walk through that door, Canada’s policy-makers and leaders will need to back up their promises with strong policies—and results,” she notes. “Fortunately, they have the opportunity to learn what works—and what doesn’t—from jurisdictions that broke early ground, and apply those lessons to developing a thriving clean energy sector backed by public support.”

Overall, Clean Energy Canada says renewable energy has received $45 billion in investment in Canada over the last five years, including $19.4 billion for wind, $13.8 billion for large hydro, and $8.4 billion for solar. “The mix of investors is diverse,” the report states. “It includes provincial Crown corporations, Canadian businesses, and multinational companies. Some of the biggest Canadian players have their roots in fossil fuels—oil and gas, pipelines, and coal-fired power—but are branching out into renewable energy.”