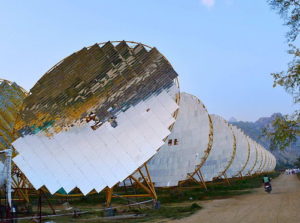 By agreeing yesterday that they will both ratify the Paris Agreement this year, U.S. President Barack Obama and Indian Prime Minister Narendra Modi may have guaranteed that the global deal will enter into force years before it was expected to—and survive any challenge it faces after the dust settles on U.S. presidential elections later this year.

“If India joins, it will practically put us over the hump of 55% of global emissions required for ratification,” said ex-U.S. State Department negotiator Andrew Light, who now works at the World Resources Institute. The U.S. had already signaled its plans to sign this year. But India’s support for the deal, representing 4.1% of total emissions, is a crucial milestone.

The deal takes effect 30 days after it is ratified by at least 55 countries, representing at least 55% of global emissions.

At their meeting in Washington, the two leaders also agreed to limit emissions of hydrofluorocarbons (HFCs), a potent greenhouse gas used as an air conditioner refrigerant, conclude a deal for six commercial nuclear plants within a year, support small-scale renewables investment for off-grid communities, jointly fund as many as a million solar homes in India by 2020, and push for reductions in international aviation emissions.

“The two sides provided few specifics about how they would achieve those goals,” beyond affirming that Obama and Modi “share the same objectives and have established time frames for resolving differences,” the Washington Post reports. But “even without the agreed deadlines, the recent pledge by presumptive Republican presidential nominee Donald Trump to renegotiate the Paris climate accord if he is elected has added a sense of urgency among world leaders to make sure the pact goes into effect before the end of the year.”

On HFCs, India agreed to an accelerated phaseout schedule, while the U.S. undertook to “support a push for financial aid from wealthier countries to help manage the transition,” Vox reports. “This seems like a bit of arcane bureaucratic wrangling, but it’s potentially a big step,” since HFCs are 10,000 more potent a greenhouse gas than carbon dioxide—and developing countries like India and China are expected to install 700 million new air conditioners in the next decade. Amending the Montreal Protocol, which banned ozone-destroying chlorofluorocarbons in the late 1980s, could avoid 0.5°C of global warming by 2100.

The leaders also agreed to mobilize US$1 billion to co-fund small-scale renewable energy investment, “particularly in poorer, rural villages that are not connected to the grid,” plus US$400 million to install clean, renewable energy in up to a million Indian homes by 2020, ThinkProgress reports. (TP reports the countries’ actual investments at $40 million for the off-grid program and $20 million for the home finance initiative.)

“We have worked very collaboratively with India to try to address in practical ways the issue of trying to drive additional finance and additional investment into India’s renewable sector,” said White House advisor Brian Deese. “The goal will be to provide the risk capital that is often identified as the key missing variable.”