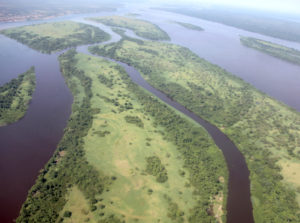 The Democratic Republic of Congo is about to begin construction on the largest hydro dam in the world, a project that could eventually cost more than US$100 billion, produce 40 gigawatts of electricity, displace up to 60,000 people, and be built with no environmental or social impact assessment.

The first phase of work, Inga 3, will dam one channel of the Congo River at Inga Falls and produce 4.8 GW, at an expected cost of $14 billion. Subsequent phases, together costing about $100 billion, could eventually span the Congo River, the world’s second largest by volume,” The Guardian reports. “But the long-delayed project, whose backers claim it could provide about 40% of Africa’s electricity, may violate national law and international guidelines for the development of mega-dams.”

Project director Bruno Kapandji said social and environmental assessments will not be complete by the time construction begins in November. “It is a choice to make, people have no electricity. We set an objective—we have to produce energy,” he said in a filmed interview with International Rivers, a California-based NGO.

“There are a lot of studies to carry out, at least 18, and we favour some over others based on priority, and to allow us to…develop a tender document that will be technically and financially acceptable.”

International Rivers Interim Director Peter Bosshard responded that “there has been a complete disregard for affected people and the environment. It is shocking that the world’s biggest hydropower scheme could go forward without an assessment of its social and environmental impacts and a resettlement action plan in place.”

He added that “developing Inga 3 without an EIA will violate national law, World Bank safeguard policies, and Chinese guidelines for overseas contractors.”