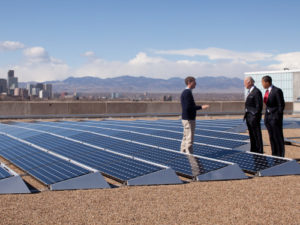 Companies that do business with the U.S. government would be required to disclose their carbon footprints and explain how they plan to cut back under a new regulation released by the Obama administration last week.

The rule published by the Federal Acquisition Regulation Council would span the government’s entire US$400-billion supply chain, requiring suppliers and contractors “to reveal if they publicly report greenhouse gas emissions, their plans for paring them, and the risks that climate change pose to their operations,” Bloomberg reports.

In a blog post, the White House said the regulation “leverages the federal government’s purchasing power to push for this type of unprecedented disclosure government-wide,” sending “another clear market signal that there is strong interest for disclosure of greenhouse gas emissions and climate-related risk data.”

Bloomberg says the rule would affect aircraft manufacturers like Lockheed Martin and Boeing, shipbuilders like General Dynamics and Bechtel, and fossil giants like ExxonMobil, Royal Dutch Shell, and Valero Energy Corporation, all of them major suppliers to the Pentagon.

David Turnbull, campaigns director at Oil Change International, called the regulation an important step, but told Bloomberg the government should make climate impacts a key criterion for awarding contracts. “Taxpayer dollars shouldn’t be going to companies who are standing in the way of climate action,” he said. (h/t to Clean Energy Review for pointing us to this story)