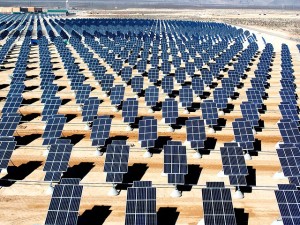 “First movers are important, paving the way and sharing their learnings with others,” reports the Rocky Mountain Institute (RMI), one of the four non-government organizations behind the alliance. “And the majority of the industry’s first movers were in the room, with attendees from 17 of the 28 corporations that have signed deals for over 5.5 GW of renewables.”

But the meeting also included representatives of 30 companies with no prior investments in renewable power. “Corporate renewable energy purchasing has moved beyond just IT companies and data centres,” RMI declares. “Now companies making diapers, beer, theme parks, and candy are starting to find out that they, too can join in and take advantage of renewable energy options.”

Beyond the wider group of participants, RMI distills two major takeaways from the two-day gathering: an interest in structuring deals to transform the market, and a focus on opportunities beyond the United States.

“As new corporate buyers enter the market to purchase renewables, they are keen to understand any potential risk exposure,” the Institute states. “Themes that emerged from these discussions were some buyers’ willingness to pay a premium in order to avoid risk, the potential role of market intermediaries, many buyers’ continuing preference for shorter-term deals, and the need for resources to properly address common concerns posed by CFOs.”

While the U.S. has been the focal point for corporate renewable energy purchases to date, the companies themselves are global in scope. And now, they’re looking to extend their reach.

“Corporations with global supply chains and global value chains—including brand-driven companies such as Procter & Gamble and Mars, as well as companies in sectors like pharmaceuticals and industrials—are exploring the feasibility of procuring power in regions of the world where renewables will offer economic benefits,” RMI notes. “While India and China are of top concern as carbon emitters, most companies are concerned with their supply chains and are deciding where renewable energy will go on that basis.”