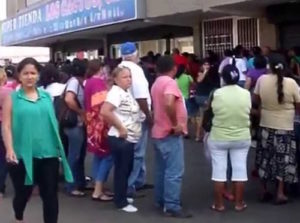 Venezuela’s economy, South America’s fourth-largest as recently as 2013, is imploding, threatening political meltdown in the nation of 30 million—and it is just one of several petro-states suffering varying degrees of crisis from oil’s price collapse, according to author and academic Michael Klare.

“When oil was selling at $100 per barrel or above,” Klare writes, “these countries could finance lavish government projects and social welfare operations, ensuring widespread popular support. Now, with oil below $50 and likely to persist at that level, they find themselves curbing public spending and fending off rising domestic discontent or even incipient revolt.”

Venezuela is the petro state closest collapse, says Klare, the director of the Five College Program in Peace and World Security Studies at Hampshire College in Amherst. But Iraq’s chronic disarray, as well, can partly be put down to its over-reliance on oil revenues, and the same syndrome contributes to tensions in countries like Russia and Nigeria, Klare maintains.

Venezuela claims the world’s largest proven reserves of oil, but its 17-year-old Chavista regime is “too deeply committed to their existing business model (and its associated leadership system) to consider significant changes,” Klare notes.

“According to the IMF, [Venezuela’s] economy contracted by 5.7% in 2015 and is expected to diminish by another 8% this year—more than any other country on the planet. Inflation is out of control, unemployment and crime are soaring.”

And with its pockets empty, the country’s public services are literally shutting down, the New York Times reports: “The courts? Closed most days. The bureau to start a business? Same thing. The public defender’s office? That’s been converted into a food bank for government employees.”

Economic mismanagement and corruption account for much of Venezuela’s woe. But a record drought that has emptied its most important hydroelectric generating reservoir hasn’t helped. “Electricity and water are being rationed, and huge areas of the country have spent months with little of either,” writes the Times.

Until the weekend, Venezuela’s President Nicolás Maduro had refused to part from the policies of his radical leftist predecessor, Hugo Chavez, turning increasingly to repressive states of emergency and shows of force to maintain his position. For the first time in weeks, however, representatives of his government met Saturday with opposition leaders to try to bridge their differences, Bloomberg reports.

Meanwhile, a similar pattern of over-reliance on oil, and the enmeshing of national elites with the oil industry, is contributing to Iraq’s persistent instability, Nigeria’s inability to reconcile its economic inequalities while relieving poverty, and Russia’s deepening democratic deficit, Klare argues. A cash flow squeeze is hampering even Saudi Arabia’s efforts to reduce its economy’s oil dependency.

Repression, tension, and instability in pivotal regions tend to reach out to the rest of the globe, he adds. “Given the centrality of fossil fuels to our world for the last century or more, the chaos that could ensue in the oil heartlands of the planet from low oil prices and high supply is likely to create unpredictable new nightmares.”