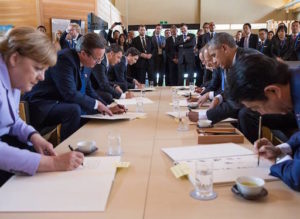 Meeting with other G7 leaders in Japan, Prime Minister Justin Trudeau agreed to eliminate “most” of an estimated $46 billion in annual Canadian subsidies to the fossil industry by 2025. But the heads of state gave themselves some wiggle room in deciding how to deliver on their promise.

How much subsidies will actually fall in the wake of the latest commitment is difficult to guess, The Guardian reports. G7 leaders hedged their promise somewhat by undertaking only to eliminate subsidies that are “inefficient”—implying visible financial subsidies that arguably distort markets. It was unclear whether broader social and ecological subsidies—such as unchecked or unremedied pollution—would be addressed.

Leaders of the G20 economies first promised to eliminate fossil subsidies at a meeting in Pittsburgh in 2009. The World Bank, the International Monetary Fund, and the International Energy Agency have all urged nations get on with the job, and the Organisation for Economic Co-operation and Development (OECD) eliminated most export credits for coal plants in the weeks leading up to the Paris conference. The G7 declaration puts a deadline on a full phase-out for the first time.

Oil Change International and the Overseas Development Institute estimated in 2015 that the larger group of G20 countries paid US$452 billion in subsidies every year to coal, oil, and gas producers—with Canada’s share at $3.6 billion.

However a more expansive definition employed by the International Monetary Fund places the figure much higher, at $46 billion a year for Canada alone. The IMF estimates global subsidy spending at a “shocking” $5.3 trillion a year, or more than $10 million per minute, more than total global expenditures on human health.”