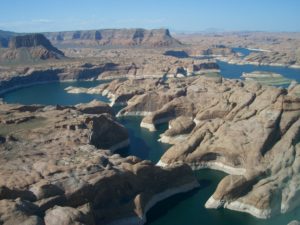 Levels in the latter reservoir, which provides Las Vegas with its water supply and controls downstream deliveries, haven’t been this low—more than 44 metres below full capacity—since the reservoir behind the Hoover Dam was first filled. Meanwhile, the upstream Lake Powell reservoir is less than half-full and losing as much as a billion cubic metres of water a year to a combination of evaporation and leakage into the ground, the New York Times reports.

One consequence: hydro power production from Glen Canyon, whose revenue funds maintenance of the Upper Colorado dam system, has fallen so far that “in 2014 the agency managing power at the dam spent $62 million buying extra power on the open market to make up for shortfalls,” the paper reports.

With climate forecasts indicating that water flows in the Colorado River will never return to volumes experienced in the early 20th century when both dams were conceived, some experts are now suggesting their reservoirs would be better off combined.

“The idea is this,” explains the Times: “Since two of the nation’s largest reservoirs—Lake Mead and Lake Powell, just 300 miles apart—depend on the same dwindling water source but are each less than half full, they should be combined into one. Lake Mead would be deeper, and its evaporative losses would increase. Furthermore, sending the water out of Glen Canyon would move it from a valley that leaks like a sieve into one that is watertight.”

Removing dams has become more popular in recent years, with six coming down in the western United States last year alone. But emptying Lake Powell while mothballing the dam that created it is likely to encounter fierce opposition from Upper Colorado basin states, and would be further complicated by the existence of a Congressionally-sanctioned, 94-year-old compact that codifies water entitlements for each of the seven states that border the river.